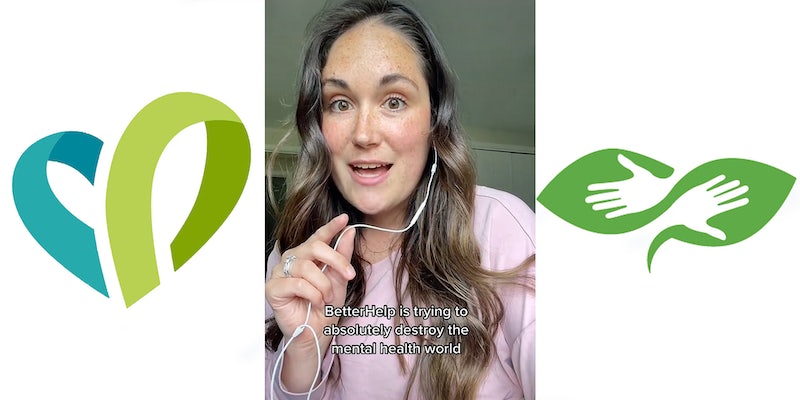 ‘BetterHelp is absolutely trying to destroy the mental health world’: Therapist calls out BetterHelp for using unaffiliated providers’ information to get new clients

'That feels illegal on so many levels.'

A therapist on TikTok is calling out “largest online therapy provider” BetterHelp for bait-and-switching users by utilizing the information of therapists not affiliated with the service.

The TikToker, Alicia Murray (@therapywithmillenials) claims that folks who find the information of therapists on a service called CareDash are then redirected to BetterHelp’s site. They’re told that the therapist they chose isn’t available for a session, but BetterHelp then recommends other therapists who are actually able to take on the work.

“If you heard what’s going on with the therapist world right now, as if BetterHelp wasn’t already on my shit list, buckle up,” Murray starts. “…CareDash has somehow made profiles for basically every therapist who’s licensed that’s out there. When you are licensed your information is public cause you have to register with the state that you live in.”

She goes on to say that in many instances, the information of non-affiliated therapists is being culled from mental health platforms therapists themselves pay out-of-pocket in order to be a part of, intoning that BetterHelp is profiting off of their investments, even if they aren’t attached to the service.

“So CareDash has made profiles for every therapist, mental health, social worker, marriage and family therapist, stolen their information from their website, or other directories that we pay to be on, and when you click ‘work with this therapist now,’ guess where they bring you? BetterHelp,” she explains.

Murray acknowledges that treating mental health can be profitable, however, she notes that most mental healthcare providers must invest in resources that CareDash and BetterHelp are now using to their benefit.

“Listen, I know people think there’s a lot of money in mental health, but we are very small fish,” she concludes. “We pay continuing education fees. We pay licensure fees. We pay insurance. We pay platform fees. We pay website fees. We pay fees to keep client chart information and appointment information. And we pay for our video software. We are small fish here. Why does BetterHelp need to use us as pawns to get people to their website?”

Due to blowback from therapists like Murray online, BetterHelp released a statement Thursday on Twitter claiming that they had stopped promoting their services through CareDash. The company also urged mental healthcare providers with concerns about potential “ghost” profiles on CareDash to reach out to them directly, as the company’s no longer have an arrangement.

On TikTok, viewers were miffed by Murray’s claims about the mental health platform.

“That feels illegal on so many levels,” one user wrote.

Then some folks said that scarily enough, the service listed the home address of a place they used to live at.

“Yup. I’m on there too and it stresses me outttttttt. Ahhhh,” one added.

“OMG I just looked myself up,” a second claimed. “My name came right I’m. I’m not even an LCSW yet.”

Some shared their own experiences with BetterHelp, while others said that they were all for gobbling up “slander” on TikTok regarding the platform. Then there were those who said that their experiences with BetterHelp therapists weren’t positive, like one person who was told to consider their struggles with insulin and type 1 diabetes medication coverage from “an insurance perspective.”

Several viewers also highlighted the “irony” of BetterHelp’s Privacy Policy, which states, “Your privacy is extremely important to us. We are constantly putting a great deal of thought, effort, tools, resources and procedures in place in order to protect and safeguard your privacy.”

“I just checked and they posted their policy states that they will not take down profiles,” one user noted, however CareDash and BetterHelp both have separate policies pertaining to private user info.

According to Alicia, this same type of privacy doesn’t extend to non-affiliated therapists BetterHelp lists on its platform.

Others tagged popular creators who’ve worked with BetterHelp before. “@Philip DeFranco you might wanna look into this for spreading the word possibly on the show,” one user wrote.

In fact, BetterHelp has faced controversy for its influencer marketing model. Maastricht University published a piece in 2021 highlighting criticisms the app received for using influencers to advertise its service by “capitalizing” on the mental health issues of their followers.

“BetterHelp has offered brand partnerships to influencers amongst the biggest on social media: Shane Dawson and Philip DeFranco have posted very ‘personal videos’ about their struggles with mental health and encouraging their followers to seek help,” the article reads. “At the end of the video, the Youtubers proceeded to promote the BetterHelp services, this included affiliate links which reportedly earned them money for every subscription contracted by one of their fans.”

There have also been reports of booked counselors never showing up to client’s sessions, inequities in pricing, paying actors to extol the brand, and influencers advertising terms of service that don’t actually represent the terms the company embodies on its own website.

The Daily Dot has reached out to Murray on TikTok and BetterHelp via email for further comment.