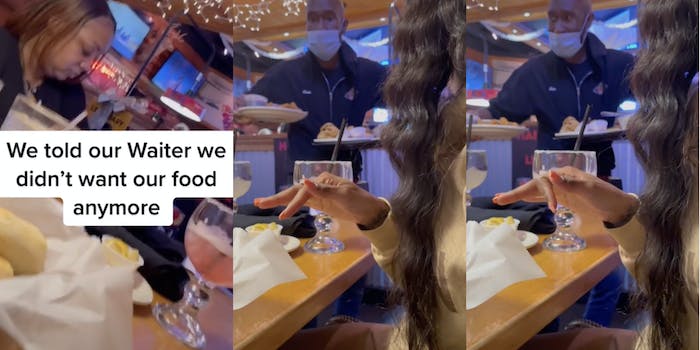 ‘Idk why people think servers are there to humor them’: TikToker pranks Texas Roadhouse server by pretending to cancel order, sparking debate

'You gotta be joking, right?'

A viral TikTok video shows a woman pranking a Texas Roadhouse server by pretending to cancel her family’s entire food order. The video sparked debate regarding the treatment of servers.

@nunie.b filmed and posted the video taken from a Texas Roadhouse restaurant in Madison Heights, outside Detroit. The overlay text read, “We told our waiter we didn’t want our food anymore.”

Sure enough, after the server arrived with their order, she joked around with the server, unbeknownst to him.

As he began to set down food from the family’s order, she told the Texas Roadhouse server, “You know what, Kevin? I think we just gonna cancel everything because we’re kinda full off the bread.”

Then she busted out laughing, but he’s more relieved than anything. “Y’all don’t know I have customers sometimes,” he said as the clip ended.

Though many liked the joking around with the Texas Roadhouse server, some in the comments weren’t entirely complimentary to the exchange. One person wrote, “Idk why people think servers are there to humor them.” @nunie.b replied, “Some servers have the BEST sense of humor.”

Another wrote, “Some people need to find another way to entertain themselves and let these people work stress-free.” @nunie.b responded saying, “We made his day better.” A commenter said she “felt bad” for the Roadhouse server, and @nunie.b replied that, “He was a good sport, though.”

Still, many weren’t pleased. “Not funny,” said another commenter. “People really think it’s okay and right to do think like this.”

A few commenters said they had been to this restaurant and waited on Kevin, the [email protected] replied one comment that he was a “very sweet man.”

The Daily Dot has reached out to @nunie.b for additional comment.