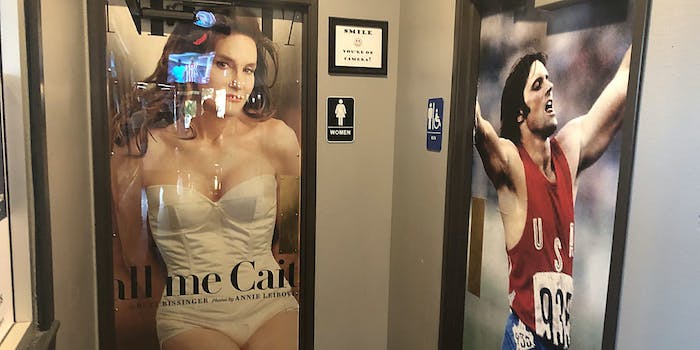 This is harmful on so many levels.

A Cajun restaurant in Texas is demarcating its men’s and women’s bathrooms in a way management must think is clever: with two pictures of Caitlyn Jenner, before and after her transition. But for transgender patrons, that joke stings particularly hard.

The Dallas Morning News’ Dom DiFurio first pointed out the bathroom images at Dodie’s Place in Allen on Twitter, criticizing the restaurant online. Followers quickly agreed with DiFurio and pointed out how the bathroom stigmatizes transgender women.

DiFurio told the Daily Dot that Allen isn’t necessarily seated in a progressive area, which may explain why the restaurant went out of its way to make fun of Jenner. The bathroom’s prospective audience doesn’t excuse the joke, though. After all, plenty of LGBTQ people live in red states.

“Collin County, where Allen, Texas is, as a whole is considered a conservative bastion in North Texas,” DiFurio said. “I wouldn’t consider it a particularly great place to be LGBTQ.”

The Daily Dot also reached out to Dodie’s Place but has not received a response.

Obviously, demarcating gender with before and after photos of a transgender person is incredibly insensitive. By designating Jenner as a man before her gender transitioning, the images imply that gender is only skin-deep. In reality, science suggests that transgender people experience gender dysphoria because they experience their gender identity psychologically, not just physically. In other words, Caitlyn Jenner was a woman before she began changing her body and name.

The images also imply that transgender women have to look or transition a certain way to be seen as women. They have to appear like cis women or attempt to pass through a femme gender expression. Transgender women who are still grappling with their gender identity or early into their transition, like Jenner in that pre-transition photo, are billed as too masculine to use the women’s room. It’s a fundamental misunderstanding of gender dysphoria, one that can lead to transgender women being discriminated against if they don’t pass.

I don’t understand how this has assumedly been up for as long as it has.

Then there is the allusion, whether intended or not, to Texas’s bathroom bill that was up for debate this year. Now dead, the proposed law would have made transgender people use the restroom that correlated with their assigned gender, not the one they identify with. In other words, the treatment of transgender people has already been up for grabs in the state.

Plain and simple, Dodie’s is turning transgender women into a joke. Positioning the images adjacent to one another reminds patrons that Caitlyn Jenner was publicly known as a man for years. Turning a trans woman’s transitioning into a public spectacle is not just deeply hurtful, it can be invasive for trans women who want to leave their pre-transition years behind.

“I saw it as a bit of a physical manifestation of the wink and nod jokes told often to me when I see people from that part of town,” DiFurio said. “The kind of jokes where you feel like the person telling the joke wants you to laugh to verify their inclinations, but doing so would perpetuate a terrible environment for anyone in the LGBTQ community.”

Dodie’s Place probably doesn’t understand those consequences, however. Its management just thinks of gender transitioning as “a man becoming a woman.” It makes for a cheap laugh for patrons going to the bathroom, but the restaurant should remember that real violence results from that kind of insensitivity.