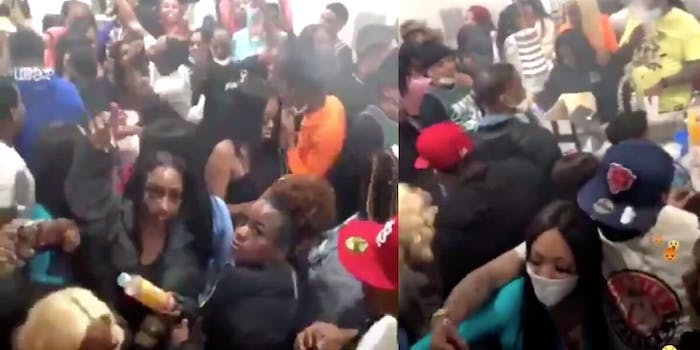 People danced close to one another and repeatedly touched a stripper.

Dozens of people ignored social distancing guidelines, partying close to one another and touching a stripper, at a house party over the weekend in Chicago, TMZ reports.

The party reportedly had more than 1,000 guests, and a video shows a crowd of people crammed into a small space. According to Complex, however, there were fewer than a hundred people when officers arrived at the scene.

On Sunday, a Twitter user posted a video from Facebook Live showing a glimpse of the party that took place the night before.

Chicago police ended the party, broke up a group of about 50 people, and closed the venue, Chicago’s WGN9 reported on Monday.

The Center for Disease Control and Prevention has advised people to maintain 6 feet from others to contain the spread of the coronavirus, but The video makes it clear that party-goers weren’t following social distancing guidelines.

While some people wore masks on their faces, others only had masks around their necks. The video also shows people touching and dancing against others.

TMZ reported the homeowner invited people on Facebook Live and was fined for violating the state’s stay-at-home orders. According to WGN9, however, the homeowner had no idea about the party, and it was her son who threw it.

In one video shared by TMZ, a stripper dances on the floor while other party-goers touch her. The video was no longer available on TMZ as of Wednesday afternoon.

Chicago Mayor Lori Lightfoot condemned the party, calling it “foolish and reckless,” according to TMZ.

“There’s got to be a level of personal responsibility for that. Millennials aren’t children,” she said. “Millennials—many of ’em—are in their 20’s. They’re fully functioning adults. And, we expect adults to act responsibly—particularly at a time of a pandemic.”

Chicago currently has more than 19,000 cases of the virus and has reported 826 deaths.