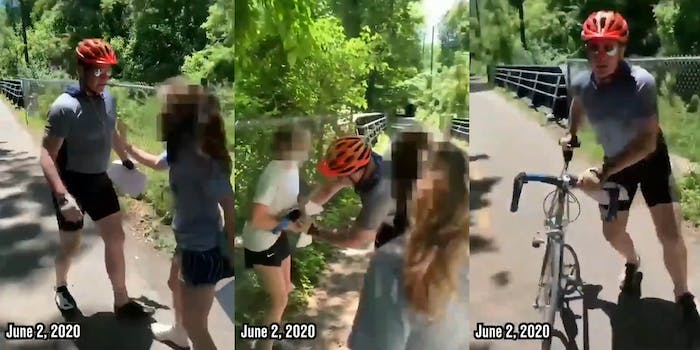 'No grown man has the right to touch children, ever.'

A viral video from Maryland shows a man attacking a young girl and snatching George Floyd protest papers out of her hands on Monday.

The video shows a man aggressively approaching a girl with flyers in her hand. The girl starts to back up, visibly afraid. Meanwhile, people outside of the camera’s frame can be heard telling him to stay away from the girl. The man then grabs the papers out of her hands and appears to attack the person filming the interaction as he leaves.

“This grown a** man just did this to a little girl who was posting flyers in support of George Floyd,” Twitter user @nyccookies wrote in just one of the many viral tweets about the incident. “This is sick. No grown man has the right to touch children, ever.”

The teen filming the video is part of a project to raise racial awareness in wealthy suburban areas, according to NBC Washington. The teen said they were posting signs about Floyd, the 46-year-old Black man killed by police in Minneapolis.

That’s when the man approached the young activists, cussing at them and saying that they were inciting riots.

The last thing viewers can see in the video is the cyclist rushing the person recording.

Since the video went viral on social media, the police and the state attorney general have implored people to identify the cyclist.

The swift reaction from the police and the local government has exasperated some people. They say that the authorities are much more responsive to injustices when it’s a white person. In contrast, they say, little is done about videos that show clear wrongdoing against Black people.

Twitter users are saying that the cyclist is a former police officer whose son is also a cop. However, just yesterday, Twitter sleuths convinced that they had found the cyclist were later proved wrong.