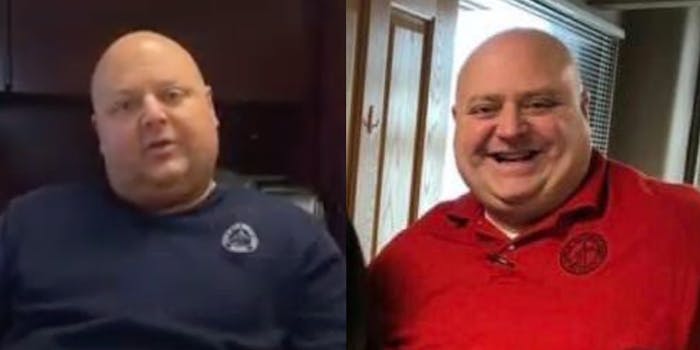 A police sergeant in Indiana was placed on leave after he suggested nuking China in retaliation for the coronavirus, which he apparently believes is a man-made biological weapon.

According to the Tribune-Star, Sergeant Bradley Newman, who is with the Terre Haute Police Department (THPD), suggested killing millions of people while also touting the conspiracy theory in a Facebook post on Dec. 6.

“Is it just me or does anyone think we ought to nuke China. This virus wasn’t an accident. Kind of tired of the United States allowing people to walk all over us then wondering why people don’t look at us as a superpower. China needs to be held accountable!” he wrote.

“When Japan attacked us at Pearl Harbor we handled that at Hiroshima and Nagasaki! This has gone on for almost a year. Just my two cents but it’s time to send a message that this isn’t acceptable. Bombs away!” he continued.

A commenter asked Newman if he was “really suggesting murdering millions of innocent men, women and children as a recourse for the pandemic?”

The commenter then took aim at him believing in—and regurgitating—the debunked conspiracy (scientific studies prove the virus is not man-made, according to the National Institute of Health, Centers for Disease Control and Prevention, and the World Health Organization).

“What proof is there that this was intentional? Please read evidence only, not some cracks pot on you tube spouting conspiracy theories. I expect more from my elected officials than this type of xenophobic genocide,” the commenter continued.

Newman is in his second term as Vigo County Clerk after being reelected. He reportedly manages court documents and conducts elections.

When responding to the commenter, Newman double-downed on his initial remarks.

“Yes I am. Absolutely! Smoke’em. Time to have a set and send the message it’s not acceptable. Elected official or not – this pandemic is their fault and they need to be held accountable. Proof? How much more proof do you need? If you don’t like it don’t follow my page but this is ridiculous – the amount of damage this has caused needs to have consequences,” he wrote.

Dominique Morefield, a founder of The Reform Movement of Terre Haute who posted screenshots of  Newman’s posts and information on how to submit a complaint, is concerned about how Newman’s apparent racism and xenophobia will affect his duties as a cop and as an elected official.

“It was so racist and xenophobic. … Who knows what he’s doing out on the job,” Morefield told the Tribune-Star. “It’s very clear he has a bias, so is he targeting Asian-Americans or those he deems look of Asian descent? How is his bias affecting his job?”

The department reportedly placed Newman on leave after receiving complaints from concerned members of the public who referred to the posts as “bias-based social media posts,” THPD Chief Shawn Keen told the Tribune-Star in a statement.

Newman has since deleted the posts and is on leave while the department investigates whether he violated its social media policy.

The Daily Dot has reached out to the Terre Haute Police Department and Bradley Newman.