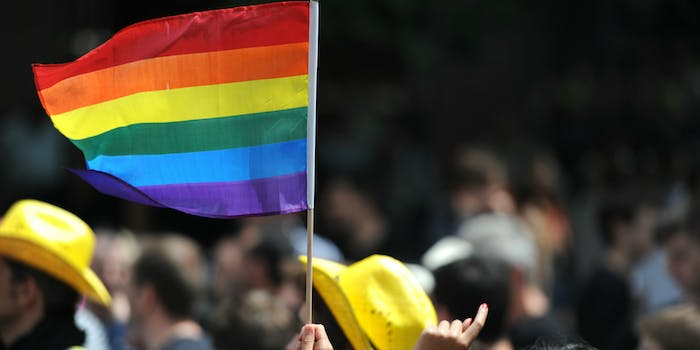 She says the school dress code enforces a double standard.

An eighth-grader in Clovis, California says she was reprimanded by school officials for wearing an LGBTQ-themed T-shirt that was too “distracting.”

The shirt in question was a white tee with black text that read, “Lesbian Gay Bisexual Transgender Questioning,” and was an Easter gift from the student’s mom, according to the Fresno Bee. The Clark Intermediate School student, Andria Zavala, says a counselor told her to check in with the administration to make sure the shirt was allowed in the school’s dress code.

When Zavala talked to Principal Teresa Barber and another administrator, she said the two school officials told her that her shirt was a “distraction to other people and their beliefs.” Under the Clovis United School District dress code, which includes Clark Intermediate School, “extreme fashion that draws undue attention to the student” is not permitted, including “distracting clothing.”

Zavala told the Bee that she was told to button up her flannel to hide the queer-themed shirt.

A spokeswoman from Clovis Unified School District somewhat refutes the claim and says the principal asked Zavala if she felt her shirt was a distraction to students, and to button up her shirt if she felt that was the case. Meanwhile, Zavala told the Bee that the school dress code enforces a double standard: Other students are allowed to wear shirts with certain beliefs or logos on them without being grilled about the shirt’s content, but an LGBTQ shirt is seen as too distracting.

“I also think [the shirt] stands for pride, pride in being unapologetically yourself and not having to apologize for your sexual orientation,” Zavala told the Bee.

As Zavala points out, the shirt is just raising awareness that some people in the world aren’t straight and cisgender. But then again, women are regularly told to “be modest” when they go to school, so in Clovis, that may include hiding one’s sexuality and political identity, too.