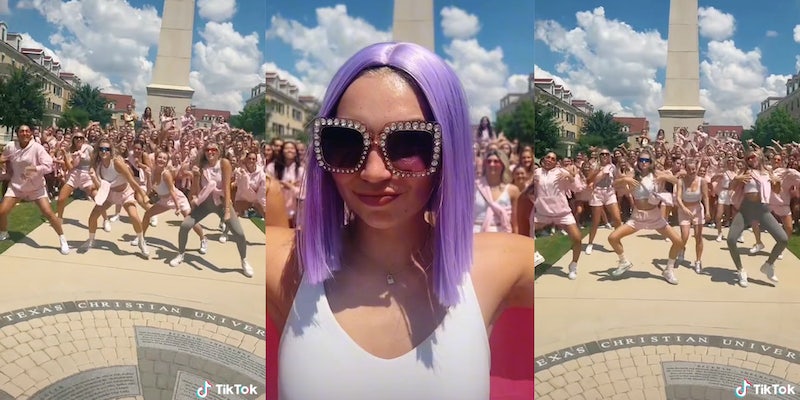 ‘TCU what in the hell’: People call out sorority recruitment TikTok dance for cultural appropriation

"Nobody stopped and ask 'Just because we can, should we?'"

As #RushTok is in full swing again, sororities—and sorority hopefuls—are posting videos related to the greek life rushing process. One video in particular, a TikTok video from Pi Phi sorority at Texas Christian University (TCU), is receiving backlash on Twitter for its lack of diversity while performing a dance for recruitment during rush week.

On August 14, @mattisbear posted a TikTok from TCU’s Pi Phi chapter, which shows the women dancing to Yo Gotti’s song “Law,” on Twitter. The song is about unspoken rules, like “don’t fuck no bitch that’s fucking with your dawg” and “if you come up, don’t forget about your dawgs.”

“TCU what in the hell,” @mattisbear captioned the video. On TikTok, TCU Pi Phi’s video had almost 2.5 million views on Monday.

In a Twitter direct message to the Daily Dot, @mattisbear said that his “what in the hell” reaction was directed at the sorority’s “dancing, the usage of a song from 2016 that you wouldn’t immediately associate with an all-white sorority chapter, the weird attempt at swag surfing in the background.”

“And I think more predominately, the whole rushtok trend itself,” @mattisbear told the Daily Dot. He clarified he thinks #RushTok is a “harmless” and “very weird” online trend.

“At least UCF’s had some seasoning on it,” @mattisbear tweeted.

Many Twitter users agreed with @mattisbear’s “what in the hell” sentiment about TCU Pi Phi’s video.

“That’s a no for me,” @paostephen replied.

Others specifically commented on white girls dancing to a song by a Black artist.

“Nobody stopped and ask ‘Just because we can, should we?'” @road_builder_TX replied. “And it really shows.”

The Daily Dot reached out to TCU’s Pi Phi chapter via email.