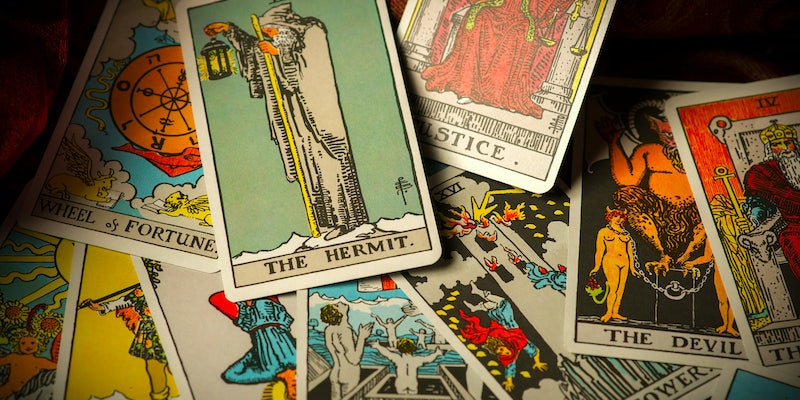 An increased need for reassurance is paving the way for a tarot resurgence.

Fridays are swap days in the Tarot Readers Academy Facebook group. “Headmistress” and group founder Ethony Dawn will create a post and hundreds of the group’s almost 14,000 members will comment to offer or ask for tarot readings, which are then exchanged often through Facebook Messenger.

Strangers DM, usually with only the briefest of pleasantries before exchanging a wide range of hyper-personal questions: I hate the career path I’m on, where should I turn? I’m overwhelmed by my responsibilities as a mother, how can I cope? How will my date tonight go?

Happy New Years Eve everyone. Wishing you all an incredible 2018. It’s been such a year. Going to write a more reflective post later but I wanted to send you all abundant blessings for 2018!

Channeling one another’s vibes, swappers such as myself will then digitally exchange tarot readings, offering insight based on the cards and our limited knowledge of each other. Tarot experience levels in the group range widely, and there is no barrier to entry or participating, though many online resources are available for newbies to understand the many interpretations of the cards. In these exchanges, I have been sent photos of handwritten notes and tarot spreads, hundreds of formatted words, Google Docs, and audio files by group members, all curated to answer my specific question.

You could say the tarot is a medium for validation: When a stranger tells you that you are loved, it often does not resonate nearly so powerfully as when that message is revealed to you by the cards.

This need for reassurance is on the rise, which is perhaps because we live in a time when the world feels rather uncertain. On Facebook, there are a number of groups similar to the Tarot Readers Academy, many run by those like Dawn who have created an online brand from their tarot skills and who then offer personal, paid readings on their websites. And in recent years, they have grown exponentially.

At over 38,000 members, Tarot Nerds, founded in 2014, currently holds the place of largest Facebook tarot group. “It used to be if you searched on Facebook for tarot, there were just a few groups that came up,” says the group’s founder, Shonna Hill, who also runs a tarot app called Galaxy Tone and multiple tarot Instagram accounts. “Now there’s so many and so many tiny ones with specialized interests.”

Reddit also has a highly interactive tarot group, r/tarot, at 18,000 subscribers. Similar to the Facebook groups (but quite different from the internet as a whole), it’s full of users who are overwhelmingly supportive and positive in their interactions with one another. As one of r/tarot’s current mods, Christopher Cornell, pointed out to the Daily Dot, the convenience of these online groups is also perhaps more significant for tarot than it is for other interests.

“Without an online tarot community, I probably would not be part of a tarot community,” Cornell says. “I am a military member and [my wife and I] move quite often. Not all cities and states are tarot friendly.”

Tarot has long been stigmatized in certain communities, in part for its affiliations with witchcraft, and its recent resurgence not only coincides with a wonky political climate, but also with Americans becoming less religious. It offers something of a New Age alternative to both organized religion and, to a degree, mental healthcare.

“Tarot isn’t necessarily about the stars aligning or seeing your fate/future on a card,” r/tarot mod Britta Buescher told the Daily Dot. “For me, tarot can be a tool that taps into our deep subconscious and psyche of the mind.”

As Dawn sees it, tarot is a multifaceted tool which can be applied to anything from psychic divination to ritualistic self-care. “I personally use the tarot as a way to check in with myself,” says Dawn. “Other people use it as a counseling tool exclusively.”

Certainly, tarot is not an alternative or equivalent to professional medical help and advice, but in a time of sky-high copays and little faith in American health insurance, the cards serve for many as a kind of self-administered therapy—but then again, they always have.

Over the past year, I have begun giving free readings at local vendor markets in Greenpoint, Brooklyn. The long lines of people who patiently wait for their reading react with intense vulnerability when I tell them the meanings of their cards—the general message often resonates deeply, like a Rorschach test, legitimizing certain feelings for the recipient. It is undoubtedly a form of therapy for many, the somewhat fortune cookie-like readings constantly prompting people to reveal to me their medical diagnoses, financial difficulties, abusive relationships, and troubles in bed. Most tip generously, and some have directly expressed to me that the experience of having their tarot read while living in a culture which often prioritizes medication over communication is greatly refreshing.

Despite the recent growth spurt, Dawn and Hill, who are notably Canada-based, didn’t feel Donald Trump‘s presidency has made any significant waves in the tarot community, online or IRL; their clients still come to them with similar issues regarding their love lives, money, careers, health and the future as they did before the election. They believe certain other modern factors, however, have had a bigger impact.

“Movements like #MeToo and the national Women’s March have really contributed to the growth of tarot,” Buescher says, significantly crediting the new generation of feminism for tarot’s resurgence. “When people think powerful women, they think about witchcraft and covens. Tarot has always been associated with that. I think these movements play into that factor.”

The internet has also expanded accessibility in a time of more open-mindedness, Buecher says. “The community has always been here. No matter the time and age, the tarot community is just more open and accepting because of things like this subreddit and other forums that give people a platform to talk tarot.”

Indeed, the inherent open format of certain social networks seems to break down the usually intimidating esoteric complexity that prevents many from taking up tarot in the first place. Among the merch-hawking and specific card-meaning questions in all these groups, there is also a constant flow of newbies seeking affirmation and advice on how to get started. Newcomers are, in every instance I have witnessed, met with positivity and encouragement, starter tips, and relevant experiences from longer-time readers. In the realm of online tarot forums, a unique dynamic has evolved where personal problems and vulnerability are met with empathy and support. Perhaps we could all learn something from tarot groups, even if you don’t believe in the cards themselves.