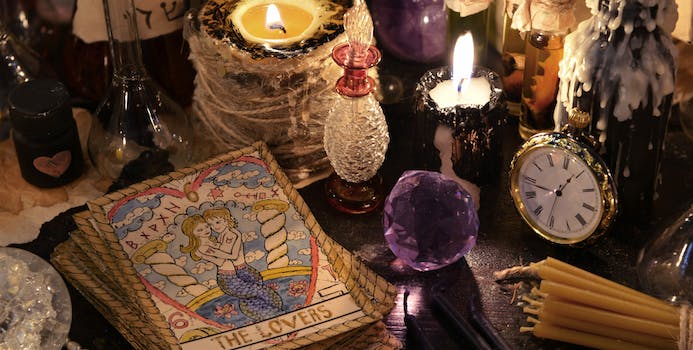 You too can have mind-blowing orgasms through sex magic

Let these witches show you the way.

I want to believe the Official Witch of Los Angeles. I do.

“There’s a special kind of energy derived from uniting with another,” she continues in her sensual California croak, nodding to a “mystical bond” forged between orgasming lovers, a bond that can ”attract all sorts of good luck and success, an energy exchange celebration that, as offered as a token to the gods, will liberate your soul and expand your consciousness.”

All of this sounds great, but not so similar to the sex I actually have, which is distinctly lacking in mysticism, divine exchange, and otherworldly communion. But then again, Huebner isn’t talking about regular old intercourse, she’s talking about sex magic—harnessing sexual energy to manifest a desired outcome.

“Anything you would use magic for, you could use sex magic,” Skye Alexander, a witch with decades of spell-casting experience and the author of Sex Magic for Beginners and The Modern Witchcraft Guide to Love Spells, told the Daily Dot. “It just has a little bit more octane to it.”

“Probably, the most intense moment that we have as human beings is climax,” she added. “In that sense, you figure ‘I’m putting all this energy and all this desire behind it,’ so you’re really upping the ante of what you can do with your magic.”

Pretty much since people have been writing things down, sex magic has asserted itself in spiritual texts. Huebner nods to the magical practices of Turkish, Bulgarian, Finnish, Chinese and Egyptian mystics. Kristen Korvette—author of Witches, Sluts, Feminists, professor of “The Legacy of the Witch” at New York City’s New School, and the person who pointed me to Huebner in the first place—noted that sexual priestesses even show up in the Code of Hammurabi, dating back to the 1700s B.C.

Sex magic has since gone on to find a natural place in tantric practices, leveraging energy into spiritual growth and greater connection with the universe. In the ancient religious-spiritual milieu of gnosticism, sexual rituals served sacramental purposes. Wiccans, meanwhile, have the Great Rite, a “marriage of polarities” symbolized in sacred ceremonial sex between priestess and priest or a new coven member. Arguably the most famous practitioner of Western sex magic, though, is Aleister Crowley, a controversial occult figure from Victorian England who drew his ideas about deriving power largely from sexual energy from tantric teachings, but also often exploited women, as Broadly points out.

But witchcraft is, in essence, about women harnessing their power, not being stripped of it. As Korvette noted, witchcraft has historically been demonized on the grounds that “female sexuality and female reproductive capabilities [were] the source of evil and darkness.” In that context, sex magic becomes all the more empowering for the modern witch and feminist. It’s about reclaiming and reframing sexuality, asserting bodily autonomy, and using both to conjure up your best life, Korvette explained. In an era of near-constant attacks on reproductive rights and women’s sexual agency, it makes sense that popular interest in witchcraft is peaking.

But back to the practical stuff: How does one set about casting a successful sex magic spell?

Sex magic works well for attracting prosperity, Alexander said. It’s useful for healing, for attracting love into your life, for launching yourself in a new job or career. So before you do anything else, set your intention: Pinpoint one very clear thing you desire, as your objective can dictate the other types of materials you might want to bring in.

If your goal concerns love or sex, for example, pink or red candles can help, as can incorporating a crystal like carnelian, which Alexander says helps augment passion. She also likes visuals: totems, or an image that represents the thing you’re trying to attract, something you can look at during climax to focus your mind back on your intention at the moment of release. Sigils, a magical sign or symbol, can be useful, too.

“Let’s say your intention is to attract prosperity,” Alexander explained. “You take those individual letters and you just wind them around, draw them, making a symbol where you interlock the letters, and you can make them any way you want, write them upside down, backwards, forwards … just make a design out of them.”

Place that sigil within your eye line, or even on your partner’s body—sex magic can certainly be a solo act, although it doesn’t have to be. You can enlist a partner, or even a whole group of partners (I recall Huebner’s hyper-magical orgy and her insistence that a witch should always keep the guest list to nine, 11, 13, or 22 attendees, or those numbers doubled, tripled, or multiplied by 7, but never one more or one less than any of those totals). But be warned: If every party involved isn’t focusing on the exact same intention, cosmic wires can get crossed. Which means you should communicate that intention and what exactly is about to go down.

When it comes to setting a date, Alexander suggests a waning moon to decrease an energy or create boundaries, and a waxing moon to attract and escalate. Korvette likes a full moon for bringing things to fruition, and recommends a new moon to usher in new beginnings. When the time comes, Alexander typically begins by casting a circle around the space where she—or she and her partner—will work, staking it out with candles. You can also set the mood, using music and scents and textures, whatever makes the experience more pleasurable for you.

“Try to maintain the level of excitation for as long as you can,” she advised, and when you’re finally ready to finish, anchor your mind on your intention. “You attach the thought to your energy as you release it, and then just let it go.”

And once you’ve consummated your spell, the best thing to do is to just let it be. Many people, Alexander explained, will continue to agonize over whether or not they completed the ritual correctly. That’s counterproductive.

“It’s sort of like if you write a letter and you keep holding onto that letter and never put it in the mailbox, it’s never going to go there,” Alexander mused. “You’ve got to let go of your thoughts and trust that they’re going to create whatever it is you intended to create.”

What you’re trying to create, though, probably shouldn’t be a relationship with one person in particular. Speaking from personal experience, Korvette warned that trying to “work with other people’s wills” is dangerous. In her early 20s, she used an attraction spell on a romantic interest and ended up with an “on-and-off long-term obsession,” the opposite of what she wanted. Perhaps a coincidence, she acknowledged, but regardless: “Maybe don’t try to snag a single person into your web” with sex magic, she said.

And that makes sense: If sex magic is about bodily autonomy and power, then trying to hijack someone else’s sexual agency for your own ends sounds sort of antithetical to the practice. Plus, casting a spell without considering all the potential consequences can backfire, as Korvette experienced firsthand. Ultimately, don’t undermine your own potential power. As Korvette put it, when doing any kind of spell work, “Be careful what you witch for.”