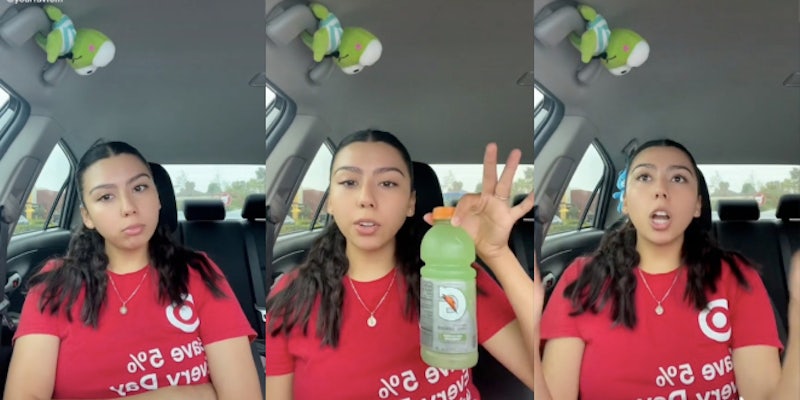 ‘It’s like he’d rather have me pass out’: Target worker says manager reprimanded her for bringing a Gatorade to work

'I just feel like he's so unhappy that he wants everyone to be unhappy around him.'

In a viral video, a Target worker claims her manager reprimanded her for bringing a Gatorade to work.

TikToker Jessika (@yourfavfem) shared a video detailing what happened on the social media app. As of Wednesday, the video went semi-viral with about 58,000 views on TikTok.

In the video, Jessika says her manager told her she can’t have a Gatorade at work, but she still plans to continue bringing the drink to her shifts because she thinks she should be able to.

The TikToker says she used to work at a different Target, where it wasn’t an issue if workers brought water or Gatorade to work, as long as the drinks had lids on them. She says sometimes workers would get water from the Starbucks inside the Target, but that was an issue because those waters didn’t have lids.

Jessika explains that she often gets dehydrated and dizzy while working and resolved to drink more electrolytes — which is why she brought Gatorade to work. She adds that she works Target’s pick-up service and has to “constantly” go in and out of the store to bring customers their orders. After running around back and forth, she says she gets hot and tired.

“How are you gonna tell me I can’t have a Gatorade? It’s like you’re making up your own rules, sir,” Jessika says of her manager. “I have never heard that I can not have a Gatorade at work. This is new to me.”

She says she chose to bring a Gatorade to work the next day to stand her ground.

“It’s like he’d rather have me pass out outside or something than have my Gatorade,” Jessika says in the video. “I’m sorry that like maybe you’re upset that you didn’t bring a Gatorade, but what’s your issue with me?”

At the Target she previously worked at, management would give employees water and Gatorade, Jessika says. During the busiest holiday season, they would allegedly give employees Red Bulls. At her current job, she says management should provide her with water if they don’t want her to bring Gatorade.

Viewers were shocked by Jessika’s story, but they applauded her for standing her ground and continuing to bring her own Gatorade. Some viewers said that if management reprimanded her again, she should take the issue to the Human Resources department.

“Yesss girl, you go in there with your Gatorade!!!” one viewer commented on the video.

“Bring it up to H.R I bet they’ll change really quick,” a second viewer commented.

A third said, “A call to corporate should calm him down.. bring your Gatorade.”

Other Target workers chimed in in the comments saying that their management also had issues with what drinks employees bring to work.

“My target is like that with every department besides drive up they do provide Gatorades/water for them,” one user said.

“This happens to me we got a new store manager and now we can’t have Starbucks or anything besides water,” another user said.

Someone else wrote, “Girl I guess we are living the same story..we got a new TL and she was like Noo more drinks besides water and small gatorades that management provides.”

Another comment read, “it’s the same as the target i use to work at. just water. i’m pretty sure the reason is in case it spills or something while on the floor.”

Some users urged Jessika to have management show her the written policy where it says she can’t have Gatorade at work.

In a follow-up video, Jessika provided an update on the situation.

@yourfavfem #stitch with @Jessika I am at peace, never be afraid to stand up for yourself. Even in your work space 😋 #fyp #work #win ♬ original sound – Jessika

“So, guess what, I can have my Gatorade, which I knew I could,” she says in the video. Jessika explains she brought up the topic to her Service and Engagement Team Lead and he told her it’s fine to have her Gatorade at work.

“[Team Leads] need to just be cordial, be able to communicate with their team members better,” she continues in the clip. “All we want is just to have a regular work relationship.”

In the caption, Jessika advised, “I am at peace, never be afraid to stand up for yourself. Even in your work space.”

The Daily Dot reached out to the creator via TikTok comment and to Target via press email.