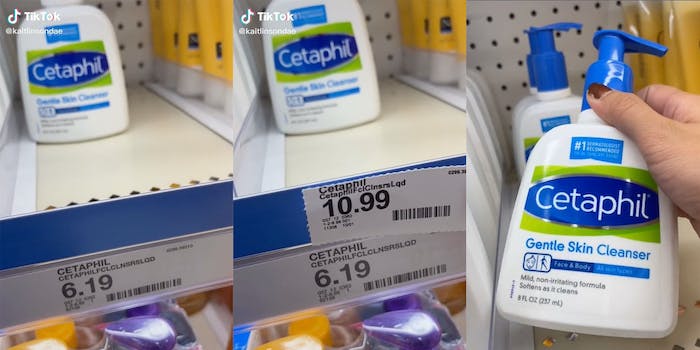 ‘What the heck?’: Target employee says prices are skyrocketing in viral TikTok

The price of face cleanser went up by over $4.

A Target employee’s TikTok video has gone viral after she posted a video showing the price of Cetaphil cleanser being increased by over four dollars.

The video has gotten over 1 million views and 91,000 likes since being posted Saturday. In the video, Kaitlin, user @kaitlinsondae on TikTok, holds the new $10.99 price tag for the cleanser and compares it to the old tag, which prices the cleanser at $6.19.

“What the heck?” Kaitlin says in the video. “They were only $6.19, and they’re like the little mini ones that are 8 ounces instead of the regular 16, so they went up quite a lot.”

The TikToker also posted about prices going up in the beauty section in August. On Aug. 27, she posted a video showing that Sally Hansen Insta-Dri nail polish was going from $4.49 to $9.99.

“OK, I work at Target in the beauty section, and why is everything going up so high?” she says in the video. Kaitlin mentioned in the comments that “there were other products that went up significantly as well,” but she did not show them in the video.

Commenters on the Cetaphil video wrote about their experiences with price increases. One user wrote that the 16-ounce Cetaphil cleanser was $24 at their local store. Another wrote that they had a $50 total at Target for items that usually only cost them $30.

Some commenters suggested that the price increase was because Cetaphil changed the formula and packaging. Kaitlin commented that her Target location has the new stock of Cetaphil cleansers but has to get rid of the old stock shown in the video first.

Cetaphil’s parent company, Galderma, did not immediately respond to the Daily Dot’s request for comment.

Another commenter suggested the increase may be due to Cetaphil’s popularity on TikTok.

The increases aren’t only happening at Target or on beauty products, however. Customers and retail employees commented that they noticed increases in grocery product prices at several stores.

Several users commented that raising the minimum wage was to blame for the increases. While the federal minimum wage has not increased since 2009, Target increased its starting wage to $15 an hour in 2020.

Others wrote that the issue is with the global supply chain, which economists agree with. According to an article by Robert Johansson, the United States Department of Agriculture chief economist, food markets are dealing with “unprecedented and simultaneous shocks to supply and demand that impacted the entire supply chain and caused significant shifts in demand patterns.”

Johansson says that these “unprecedented shocks” brought on by the pandemic made it so that consumers had to deal with higher prices at grocery stores.

The good news, according to a speech by Jerome Powell, chair of the Federal Reserve, the current inflation is believed to be “transitory” rather than long-term.

The price of the Sally Hansen nail polish already went down, according to a follow-up TikTok that Kaitlin posted.

The Daily Dot reached out to user @kaitlinsondae via TikTok comment.

Update 11:53am CT, Oct. 6: In a statement to the Daily Dot, Target said the price increase on Cetaphil seen in the TikTok video was “a pricing error that has been corrected.”

“Price integrity is something we take seriously at Target and we work hard to ensure our guests can confidently expect more and pay less every day,” the statement said.