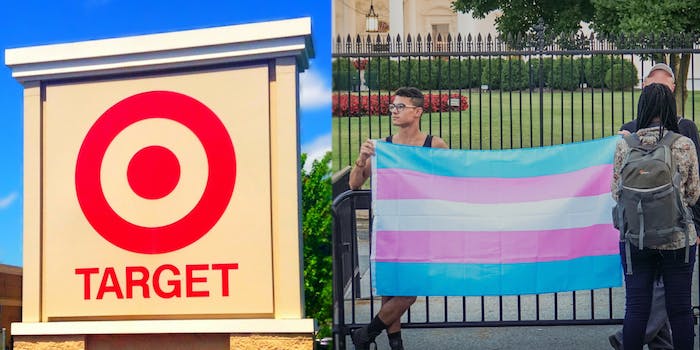 Target restocked a transphobic book because of money—not ‘censorship’

Target is transphobic only cares about the most expensive voice in the room.

There’s only one thing worse than selling a book that encourages conversion therapy: pulling it and then, on second thought, restocking it.

Last week, Target removed Abigail Shrier’s Irreversible Damage: The Transgender Craze Seducing Our Daughters after trans customers brought the book’s transphobic premise to the store’s attention. The book, as I reported earlier for the Daily Dot, relies on a series of transphobic conspiracy theories to argue that trans people assigned female at birth are being brainwashed into gender transitioning.

After Target pulled Irreversible Damage, conservatives demanded Target restock the book. The department store relented. The next day, Target offered Irreversible Damage for sale again, claiming it wants “to offer a broad assortment for our guests,” the department store tweeted. On a cursory glance, Target’s transphobia is evident in its response: Transphobia is just another option worth buying. But that public relations statement is just cover. Target is transphobic because it only cares about the most expensive voice in the room. And that voice just so happens to be right-wing.

It’s also nonsensical. Conservatives compared Irreversible Damage’s removal to Nazi Germany’s book burnings. But Nazis burned research about trans people, not conservative pundits’ mass-marketed transphobic screeds. As I reported for Truth Out in 2017, the Nazis pillaged and burned Berlin’s Institute of Sex Research in order to destroy the institute’s pioneering research on transgender life and gender transitioning. Nearly a century later, the West “lives in the shadow of Nazism’s influence on sexuality studies,” I wrote.

This shadow looms. The U.S. is not ruled by transgender people but cisgender ones. The highest positions of power in the country, from the federal government to book publishers and academic institutions, are run by cis people. These cis people get to decide how trans life is treated, from our laws to our television stations to our books in department stores. We exist under their thumb and are policed by their whims.

Taken to its logical conclusion, this means it is impossible for a trans person to censor a cis person because trans people lack cultural and institutional power over cis people in society. In a viral Twitter thread, Transgender Studies Quarterly editor and U.C. Berkley associate professor Grace Lavery argued that a small group destroying a specific commodity (such as a mass-produced book) is different from “state-sponsored destruction of that commodity.” When the Nazis destroyed the Institute, they decimated “a unique archive” only available in that institute, not a book for sale on Target.com, Lavery argued.

In other words, when a marginalized person asks for a bigoted pundit’s book to be pulled, they are not censoring the voice of the bigot because the bigot’s beliefs are still readily available at practically any other major book store. In fact, their fellow bigots have enough buying power to go out in droves and spend money wherever they can still purchase the pundit’s work.

Meanwhile, trans people struggle to have their books accepted by editors, publishers, and book stores. And even when we are published, our work is erased because cis voices are treated as the ultimate authority on how trans people should be treated. This is itself a form of censorship. For example, Irreversible Damage is Amazon’s best-selling Transgender Studies book in the Kindle Store, Lavery notes. Algorithmically, this silences trans voices while asserting a cis person knows best about trans people.

“In other words, we are once against standing outside the Hirschfeld archive: the stories of trans people are burned, excluded, not told, and not sold, while others stand by and say there were no such stories before the present ‘craze,'” Lavery tweeted.

Cries of “censorship by the left!” ring hollow. But Target does not care about who is right or wrong. It’s no coincidence that Target pulled, then returned, Shrier’s book in just 24 hours. And it’s no coincidence that both actions came after left- and right-wing online backlash on Twitter, respectively. Target did not take a principled stance when it removed Irreversible Damage, nor did it make one when it reintroduced the book. Target only cares about one thing: profit. Target’s transphobia is rooted in capitalism: Controversy is bad for profit, and it’s far more controversial to stand with trans people than against them.

More than anything, Target does not care about who it hurts or who it helps. It wants money, and it does not want to lose money. The right knows this, and it used a Twitter mobbing to scare Target into submission. And now, Irreversible Damage is back in store shelves. Target’s transphobia rests in its apathy.

So sure, Target will happily offer a transphobic hate screed on its website. The long-term harm this will cause on trans people and our work is moot to them. Money talks. And transphobic profits speak louder than trans pain.