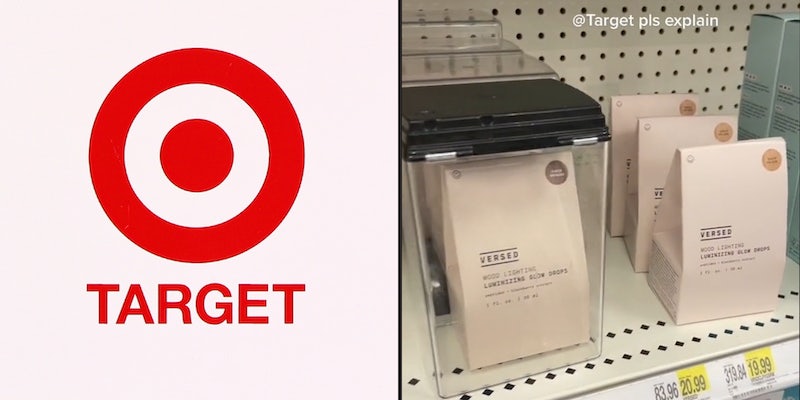 ‘That is racism at its finest’: TikToker calls out Target for putting darker shades of beauty product in security box but not the lighter shades

'@target you have some explaining to do bruh.'

In a viral TikTok, a beauty TikToker calls out Target for being racist by only putting the darker shade of a beauty product in anti-theft cases.

The clip, which was posted by Eli Levi (@elileviofficial) on Friday, shows the beauty brand Versed’s Mood Lighting Luminizing Glow Drops, which is a tinted face serum akin to tanning drops. According to the product description, “superfine, light-reflecting pigments enhance skin’s natural glow while evening out the appearance of uneven tone.” The product comes in two shades: sheer bronzed and sheer golden. The former is a visibly slightly darker shade but the brand assures “both shades work well on almost all skin tones and can be mixed together.”

In the clip, the sheer bronzed products are locked in anti-theft cases while the sheer golden are left freely on the shelf.

“Target, please explain to me why the lighter shades are perfectly out while the darker shades are packaged and security sealed,” says Levi in the clip. “That is racism at its finest in the beauty section at Target.”

Some commenters agreed with Levi: “Yup. they’ve been getting away with this for years. #shopsmall.”

“The way I GASPED @target you have some explaining to do bruh,” a TikToker wrote.

Other commenters defended Target. “I think they lock up whatever products get stolen most. so if that shade gets stolen more then they lock it up. not racism just a statistic.”

“Likely not to do with the shade but the item most stolen. Dark shades cover more than one race or ethnicity. You assumed race, why? Who?” Another TikToker wrote.

In the comments, Levi wrote: “if it wasn’t racist, they would have locked up both shades NOT JUST THE DARKER ONES! Y’all are not passing the vibe check…”

In 2019, a viral photo surfaced showing a Target store shelf with anti-theft devices on only the darker shades of makeup, causing similar controversy.

Stores such as Walmart and Walgreens have been known to lock up beauty products aimed at people of color. Some have felt this practice is rooted in racist bias. In 2018, a Black woman named Essie Grundy filed a lawsuit against Walmart because “hair and body products meant for African-Americans had been locked away behind glass shelves, segregated from products for non African-Americans.” She said she felt “shame and humiliation.” The case was ultimately dismissed. Stores like CVS have recently announced they were going to take steps to stop this practice.

The Daily Dot has reached out to Target via email and Levi via TikTok comment and Instagram direct message.