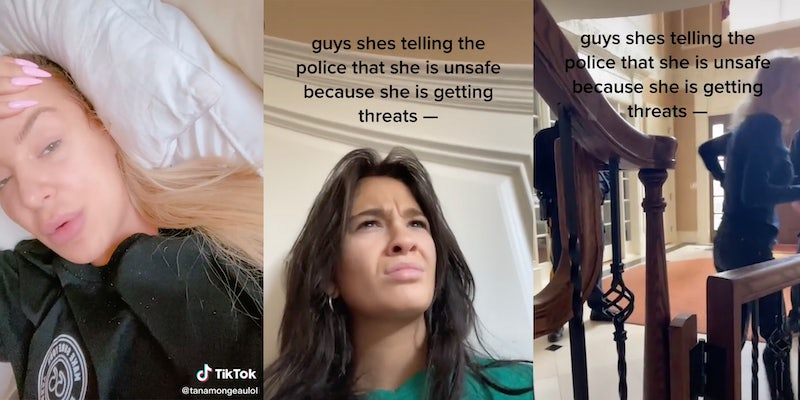 'It reminded me identically of my parents.'

In a TikTok video this week, Claudia Conway, the daughter of Trump’s former counselor Kellyanne Conway, said that her mother took away her electronics to stop her from sharing allegations of physical abuse. One day later, YouTube influencer Tana Mongeau posted a TikTok about growing up in an abusive household.

“It reminded me identically of my parents coming to my room and doing the same thing to me every day for my entire life,” Mongeau says in her video.

Mongeau doesn’t directly mention Conway in her video, but they both commented on the video expressing admiration for the other. Kellyanne Conway, however, was much less pleased with the attention on social media.

In an attempt to update her followers on the situation, Claudia Conway posted several videos on Wednesday, including one of her mom speaking to the police about the alleged abuse. “This came out of nowhere,” Kellyanne Conway says in one video. In other videos, audio indicates the former political consultant could be yelling and hitting her daughter.

“I am not looking for attention,” Claudia Conway says. “I am looking for safety. If you want more proof I will give more proof, but I don’t know what else to do.”

In the video Conway posted on TikTok, the police stand near the entrance of her house as she hides near the stairway. The police suggest that her mom take away her electronics, to which Conway argues that she pays for her phone and that it cannot be taken from her.

In later videos, Conway says her phone was confiscated and that she was left with only the laptop her school provides for her studies.

“As a woman who has such power in this country, I don’t think people really know how she is,” Conway says in one of the videos posted on Wednesday. “It is also a reminder to everybody who is in a similar situation that you are not alone. I have tried everything, everything. My parents are too powerful, and there is nothing I can do.”

Conway’s videos have received millions of views as the accusations of abuse circled the internet, causing her to stress about her mother’s response and worry she was coming off in need of attention.

“I am extremely scared after posting that,” Conway says in one clip. “She is probably going to say that she is not abusive, but that is what manipulators do.”

One day after Conway’s videos were uploaded to TikTok, Mongeau spoke out about her own upbringing.

“I grew up in a household where people told me to kill myself every day and that I would never be anything and that they never loved me,” Mongeau says. “While I hated my life a lot then, I am so happy that I lived because I eventually learned that family isn’t always blood for some people, and that’s OK.”

Mongeau also addressed standing up for oneself in situations of parental abuse.

“It’s not you,” Mongeau says. A rare serious tone for the YouTuber, Mongeau’s message gained over 1 million views in one day. Conway commented on Mongeau’s video and wrote, “I love you soooooo much.”

Neither Conway nor Mongeau immediately responded to the Daily Dot’s request for comment.