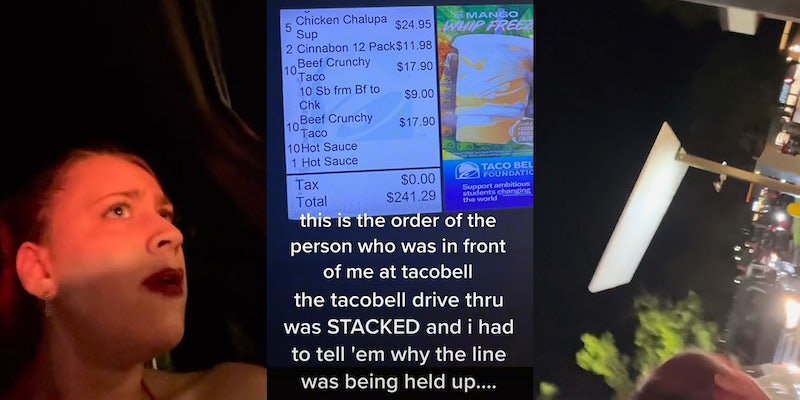 ‘This motherfucker ordered $300 worth of tacos and didn’t get Taco Bell no heads up’: Customers in the drive-thru line flame a customer’s order for holding up the line

'I would’ve quit on the spot.'

There’s a reason why many restaurants require folks placing massive orders to call ahead, or refer to its catering department. That’s because during the thick of a fast and furious rush hour service with throngs of hungry customers waiting for their meals, putting 50 cheeseburgers on the grill in the middle of getting a crying child their happy meal and explaining to someone that, no, you’ve never carried onion rings as a franchise, can add a ton more stress to an already stressful situation.

However, for some reason, there are plenty of folks who have zero qualms with walking into a fast-food franchise or ordering an ungodly amount of food without blinking.

There are many folks who’ve argued that fast-food restaurants, for this reason, should have a maximum item limit per order to ensure that transactions from customer-to-customer flow in a timely fashion. However, when there’s money to be made, it’s understandable that a business would rather inundate itself with work/orders, as being busy and forcing patrons to wait for their food is a better problem to have compared to the alternative.

But the effects of this kind of laissez faire attitude toward ordering has on already overworked employees have oft-been questioned, and the frustration of dealing with huge, spur-of-the-moment orders was captured in a now-viral TikTok from user @emily._.stott.

In the video, she takes a photo of a $241.19 order and writes in a text overlay, “this is the order of the person who was in front of me at tacobell the tacobell drive thru was STACKED and i had to tell ’em why the line was being held up….”

Emily was waiting in the drive-thru of a Taco Bell, showing that excessive ordering doesn’t just put gratuitous stress on employees but is inconsiderate toward other customers as well. She says in the clip: “Oh my God,” she then gets out of her car, and shouts “the reason this line is so motherfucking long cause this motherfucker ordered $300 worth of tacos and didn’t give Taco Bell no heads up! Three hundred dollars worth of tacos! That’s like a hundred fucking tacos.”

Someone off-camera asks, “Is he fine though?”

TikTokers who saw the post shared their own experiences at fast-food restaurants dealing with customers who didn’t call ahead for their big orders and expressed that there should be a separate ordering system for such orders.

“I used to work there and it happened a lot. i never understood why people didn’t call up before?” one questioned.

“I wish they would’ve denied their order,” another said.

Many also shared what they would’ve done if they were in the workers’ place.

“I would’ve been like ‘sir, we’re gonna need you to come in and make your catering order inside. it’ll be a 40min wait as we do have other customers,'” one said.

“I would’ve quit on the spot,” another claimed.

The Daily Dot has reached out to @emily._.stott via TikTok and Taco Bell via email for further comment.