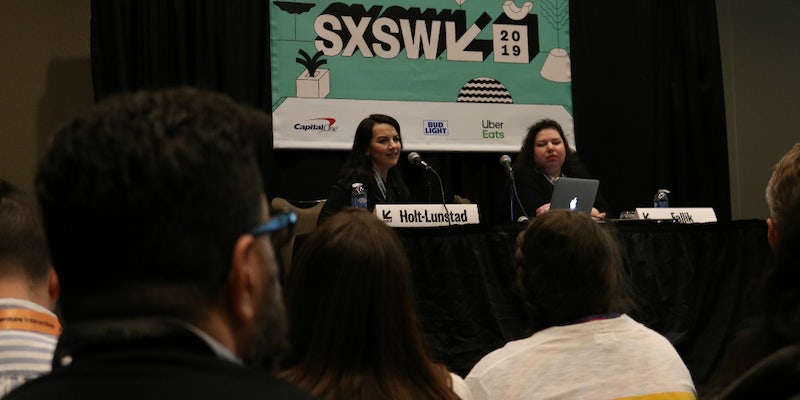 Why teens are so worried about keeping Snapchat streaks

'We’re sprinkling behavioral cocaine all over these interfaces.'

Almost every hand shot up in a packed ballroom of close to 1,000 people when members of the audience were asked if they thought social media was as unhealthy as fast food. In fact, multiple sessions about social media and its relation to health were packed to the brim at SXSW this year, proving how widespread the concern is.

“Teens are so worried about keeping Snapchat streaks. They’re so worried about what their follower ratio is, how many likes they get on Instagram. It’s really damaging to teens’ mental health,” said Gabby Frost, 21-year-old founder of the Buddy Project, at a panel about “the digital loneliness epidemic” on Tuesday.

Being addicted to these platforms is not by accident, “it’s by design,” said Aza Raskin, co-founder of the Center for Humane Technology.

“Behind every screen and all of your favorite apps, there are literally a hundred to a thousand engineers who are paid to make this thing so that you have the feeling of checking your phone either when you wake up or while you pee,” Raskin said. “We’re sprinkling behavioral cocaine all over these interfaces.”

Consequences of these designs are apparent. Raskin, who is the creator of the infinite scroll, said that the web-design technique wastes 200,000 human lifetimes per day and “robs us of our free-will.” He also pointed to the “Snapchat streak,” which keeps teens using the app everyday to reach a high “score” with their friends.

“(Social media companies are) not showing us what we want. They’re showing us things that we can’t help but look at,” Raksin said.

Seventy percent of people have either taken a digital detox or thought about doing so, according to Melanie Shreffler, a senior insights director at Cassandra. This is one of the statistics that drove media executives to conduct the panel: “Is Social Media the New Fast Food?” Shreffler said young people are becoming more and more interested in their mental health, which can be attributed to the rise of a “digital wellness” movement.

Because of this, marketers are having to find alternative ways to deliver their content to an increasingly uninterested audience. And it’s why speakers on the panel—comprised of media executives from Snapchat, HBO, and Engine—spent more time discussing how they can make their content more palatable rather than whether or not social media is unhealthy.

“I think that balance of letting them have that fast food meal when they want it, but at the same time being able to provide something that can be healthy, that can also be meaningful to them in a different way,” Shreffler said. She pointed to Instagram and Twitter’s cut-off feature that basically gives users “permission” to put their phone’s down by not providing users with the infinite scroll.

While we don’t know the long-term health implications social media usage has on us yet, we do know that it is changing the way we interact with one another. One of the most obvious effects seems to be loneliness, according to the panelists of “Generation Lonely: 10,000 Followers and No Friends.” Brigham Young University professor Julianne Holt-Lunstad said loneliness, in turn, has been linked to detrimental health effects like hypertension, obesity, and inflammation.

“I fear that we’re at sort of the precipice of what potentially is the loss of an entire generation of kids if we don’t do something about it,” said Daniel Klaus, CEO and president of Airtime Media.