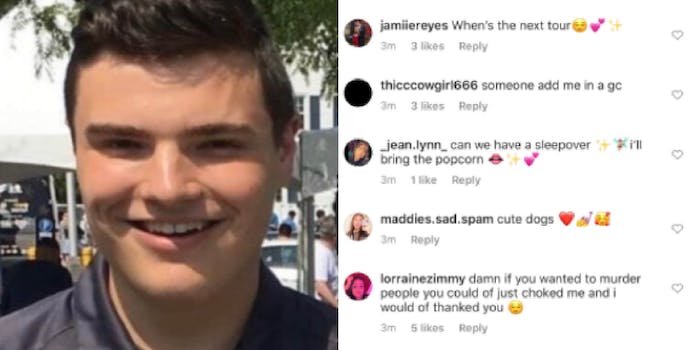 Instagram and TikTok users are leaving thirst comments on his Instagram photos and creating fancams of him.

Peter Manfredonia, a senior at the University of Connecticut, is suspected of killing two people. He’s also the suspect in an assault and abduction. All this isn’t stopping people online from stanning him.

Instagram and TikTok users are leaving thirst comments on his Instagram photos and creating stan accounts for him.

Screenshots of his alleged Instagram account with the username @pmanfro76—which has since been deleted—was flooded with comments about Manfredonia’s alleged crimes and praises of him. Others on the platform, as well as on TikTok, are posting Manfredonia fancams, which are video or photo compilations of the person being stanned, usually reserved for K-pop idols.

TikTok user @_aspensmith shared some of the comments posted to his alleged Instagram account. “Come do a world tour,” one user wrote. “WHY IS HE KINDA CUTE?” another comment read.

Others are allegedly sharing their home addresses. “Wanna take a visit to Indianapolis, Illinois?” one user asked.

One TikTok user, @Briellebelly12, expressed her concerns after seeing the trend taking place in a TikTok, saying, “Everyone is flooding his comments with their addresses because he’s still at large,” she said. “I know that sh*t’s not real. There’s no way. That’s not even funny. What is 2020? Oh, my god.”

Insider reports that the problematic content may be coming from a group within the Nicki Minaj’s fandom, Barbz, because of the inclusion of song lyrics from some of her songs.

The Daily Dot can confirm there are still multiple stan accounts up on Instagram. Most of the people behind the accounts are claiming they created the accounts in jest and are asking critics to “chill out.” The two most popular right now are @pmanfro76baee, with over 940 followers, and @pmanfro.76, with over 1,500 followers.

Maryland police confirmed on Thursday that Manfredonia is in police custody after turning himself into the police.