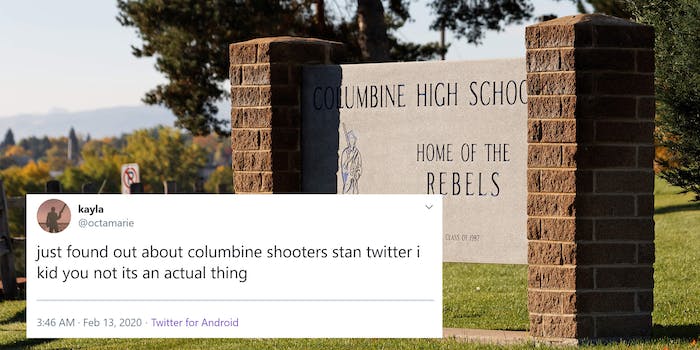 People are shook to discover Columbine stans are a thing

'I just discovered the Columbine fandom and I… deadass don't know how to do respond.'

“Columbine” began to trend online Thursday after Twitter users discovered that some people not only sympathize with mass shooters but stan them.

The trend kicked off as a response to a tweet calling for members to join a Twitter group chat dedicated to Eric Harris and Dylan Klebold, the two Columbine shooters. The teenagers carried out the Columbine high school massacre on April 20, 1999, and have since gained a cult following, particularly on social media. One tweet, which contains screenshots of a so-called “Columbiners'” content, gained a lot of traction on the platform.

“I just discovered the columbine fandom and i…. deadass don’t know how to do respond,” Twitter user @MeowMaddiexx wrote.

Another user, @BabyThriver, posted the names and faces of the 13 people who were killed in the shooting to remind users “where the attention should be.”

While this appears to be a new phenomenon for many Twitter users, some remember Tumblr’s true crime community, or “T.C.C.,” as it’s become known. It has been present on Tumblr for the better part of a decade. In that time, the community’s gained a fair amount of notoriety and earned nods from the Daily Beast, VICE, and the Atlantic. VICE described it as such:

“The true crime Tumblr community is a varied group. Many bloggers are in their teens. Some are interested in the criminology surrounding serial killers and mass murderers. Others relate to the two Columbine shooters—known in the community by their first names Eric and Dylan—and want to copy them.”

“Damn it columbine stans stay in deep corners of tumblr where you belong! WE DONT WANT YOU HERE,” Twitter user @ddaeng8__ wrote.

Columbiners and true crime Tumblr often want to assert that they, themselves, have no interest in committing copycat crimes. Some do. VICE’s story opens with a Columbiners’ failed attempt to create a copycat scenario, where he was caught by the police after they found his plans in the “#columbine” tag.

Others, however, simply have empathy for those who have done terrible things. You might remember the number of women who pined over serial killer Ted Bundy during his trial proceedings. You might also remember true crime Twitter recently getting into spats over their beloved murderers.

This is a documented phenomenon, not entirely unrelated to stan culture. But there is a difference between stanning Ted Bundy, who has killed many people, and stanning Taylor Swift, who hasn’t killed anyone. As writer Rachel Monroe once put it, when comparing Columbiners to Beliebers: “Perhaps what’s so disturbing about the Columbiners is not who they’re crushing on, but how it’s actually not so difficult to imagine what it might be like to be one.”