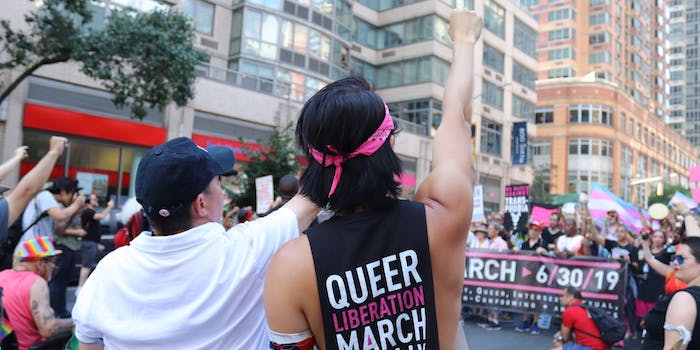 As the Supreme Court targets gay marriage, we must become more radical, not less

It's time to return to our roots.

The Supreme Court began its new term today, just weeks after Justice Ruth Bader Ginsburg’s death on Sept. 18. And before the morning ended, Justice Clarence Thomas and Samuel Alito came out swinging against their prized target: Obergefell v. Hodges, the landmark ruling that declared gay marriage the law of the land.

After the Supreme Court declined to hear Kentucky clerk Kim Davis’ “religious freedom” case, Thomas and Alito argued in a dissent that Obergefell was an “undemocratic” solution that must be pulled by the Court. “By choosing to privilege a novel constitutional right over the religious liberty interests explicitly protected in the First Amendment, and by doing so undemocratically, the Court has created a problem that only it can fix,” Thomas wrote. “Until then, Obergefell will continue to have ‘ruinous consequences for religious liberty.'”

This isn’t surprising, and yet it should send a shiver down every LGBTQ American’s spine. As ACLU’s Deputy Director for Transgender Justice Chase Strangio warned, Thomas and Alito’s statements suggest “that they are eager to overturn Obergefell already—even though it is only five years old.”

“The brazenness of the rightward direction of the Court is a threat to even the most basic expectation of legal protection,” they wrote. “What we can expect is the continued erosion of legal protections gained over the past century. And even if you, like me, are critical of movement priorities like marriage equality or formal systems like non-discrimination law, these threats will impact everything […] The courts will not save us but they will increasingly become a constraint upon our ability to organize and save ourselves.”

It should be obvious by now that the Supreme Court is not our ally. Nor was it ever. And the fight for Obergefell was, at best, an attempt to buy time before the inevitable backlash. So where did we go wrong? And how can we reset course? The answer isn’t trying to save Obergefell. It’s looking deeper into queer history and asking whether Judicial wins and reforms alone can bring the liberating future our community needs.

Many years before COVID-19 sent Americans into an endless lockdown, another pandemic ripped through the LGBTQ community and brought us to our knees: AIDS. By the late 70s, HIV had arrived in the United States; by the early ’80s, AIDS began ravaging the United States’ queer communities, particularly among gay men.

Far too many millennials have forgotten that history. But for queers who lived through that era, AIDS is not a distant memory. It permeates everywhere, in everything. It is a haunting reality. It is the uneasy and uncomfortable Sunday matinée of Larry Kramer’s The Normal Heart, as writer John Weir described it in 2013 for Gawker, sitting in disbelief as straight people your own age look on in horror at events they lived through, ignored, did not care about until it was too late. This trauma is not gone, never gone, remains within our communities, if you pay close enough attention.

And the frightening aspect of the AIDS epidemic is not just the people lost, but the attitudes they carried.

One of the long-term casualties we experienced as a community was a mindset, a type of person, the sort of radical queer who was at the highest risk of AIDS. Gay writer Edmund White lived through this era and spoke in no uncertain terms about its impact on queer rights. AIDS viciously targeted the most politically radical and sexually revolutionary among gay men, essentially leaving us behind with “dull normals” interested in domesticity and assimilationism over any semblance of queer radicalism.

“[Radical queers] were vulnerable precisely because they were willing to experiment sexually and weren’t hung up on old macho norms, because they were urban and fearless and proud and promiscuous,” White said in States of Desire: Travels in Gay America. “A whole segment of the gay world—the bravest and most unconventional—was doomed, along with countless gay performers and artists.”

Marriage equality came from this assimilationist lineage. And it was this meek version of gay rights, this rainbow capitalism future laid out by the “dull normals,” that ultimately gave us Obergefell. The fight for marriage equality was not just an experiment in dull normalcy, it was the logical conclusion from AIDS’ devastation. And while it successfully led to a Supreme Court ruling in our favor, it came at a cost: our radical politics were increasingly suppressed in the hopes that we, too, could simply become “normal” by finally achieving recognition from the same government that let us die years ago.

“In White’s view, then, it’s largely because of the historical rupture of AIDS that we have the gay rights discourse of the mid-’90s till the present day,” Slate’s J. Bryan Lowder writes. “Ours is a moment defined by a striking amount of cultural amnesia and predicated on an understanding of gayness as a mundane biological difference without any cultural component to speak of—at least not in mixed company.”

A whole two decades went by. We put our heart and souls into the fight for gay marriage. And with RBG’s death, this is our prize: back to square one.

Ever since Obergefell was decreed by the Supreme Court in 2015, LGBTQ rights activists have found themselves in constant uphill battles to defend our right to basic civil liberties: housing, employment, parenthood, you name it. The contemporary, defanged LGBT movement, divorced from its radical roots, believes the judicial system, or the legislature, or maybe even the executive can give us these rights. All we need is Biden in the White House, and things will inevitably go back to normal and stay that way, right?

Well, no. Any gains we make on an institutional level, sadly, will not last. The Trump administration wiped out Obama’s pro-LGBT executive orders. Congress has repeatedly stalled the Equality Act. And now, the Supreme Court’s conservative justices are urgently researching how to undo gay marriage. None of this is a coincidence. It’s the end result of assimilationist gay rights, a masochistic, Sisyphean task of small victories with smaller gains. If we pushed for gay marriage and declared it law of the land, if we tried really hard to assimilate into American society, the argument went, we would get a place to call our own.

This was never true. As soon as Trump was voted into office, the monumental boulder we spent years pushing up came tumbling back down into our laps. So, what do you think we should do? Should we try pushing it back up again?

When AIDS struck cities like New York City and San Fransisco, some gays and lesbians searched for normalcy. But for many others, it was a sign that the government would not save us. It was a sign that the LGBTQ community will always be at odds with the United States government. Assimilation is doomed to stumble and fall from the start because it believes in the same institutions that shut down our bathhouses and let us die during the AIDS Crisis.

“Elected officials painted gay men as oversexed animals incapable of responding to the crisis,” Iona College Professor Timothy Lyle said as part of his research on “dignity taking” during the AIDS Crisis, Bates College reports. “The [New York City] bathhouse closures perpetuated [a narrative of gay] culpability, ignited pretty serious divisions within the gay and lesbian communities, and produced within gay men, I think, a deep distrust and even fear of government—and one another, to be honest.”

Many of our most radical thinkers died during the AIDS crisis. But from those torturous years, we also received some of the most powerful queer organizations for direct action in the country, like ACT UP and the Lesbian Avengers. These groups showed us what we now know to be true: that SILENCE = DEATH, that direct action gets the goods, that there can be no queer liberation without taking our fights to the streets, without making those in power uncomfortable, afraid, unnerved.

Now is the time for us to look back to the past and unearth the legacy we left behind years ago. It’s time to read, to watch, to listen, and to understand what our queer ancestors were saying during the AIDS crisis. It’s there, in those dark years, where we may find our future.