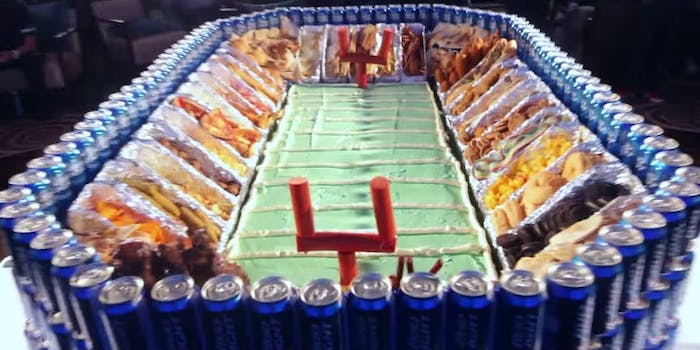 There's something for everyone here, no matter who you're rooting for.

If it’s your turn to throw the annual Super Bowl party, you may want to think beyond the usual wings and things.

With the pressure on to be the perfect host for the pre-game, first half, halftime, second half, and post-game segments, this culinary bag of tricks might come in handy. You don’t want to be that person who forgets the guac and becomes a party joke or brunt of office humor. Thanks to YouTube, here are some creative, offbeat ideas to add some zing to your football feast.

In honor of New England Patriots QB Tom Brady, we have a dish inspired by the Brady Bunch overlord and generally sweetheart of a maid, Alice Nelson (yes, that was her last name). During her tenure as the maid/housekeeper for six kids, dogs, cousins, and strange house guests, Ann B. Davis laid out some interesting dishes for the clan. Among the more notable entrées was her famous meatloaf which was later featured in the 1994 book Alice’s Brady Bunch Cookbook.

While there is no video of her creation, here is a recipe for prison-style meatloaf which seems oddly appropriate for those held captive to their TVs for six hours on Super Bowl Sunday.

By the way, Ann B. Davis later admitted she did not know how to cook.

Play with your food

Don’t tell Harley Morenstein that bacon is out of fashion. The gentle bearded giant (a bit less so since he began to diet) will be hosting an alternative Super Bowl halftime show on YouTube, but to get everyone ready for the big game, the king of all things epic takes some time out of his busy schedule to illustrate how to make a replica football stadium out of mozzarella sticks, pepperoni, and meatballs (among other ingredients).

If the game gets boring, you can tear down the goal posts and eat them. Make sure to leave room for dessert.

A recipe that will make you roar

Chef Perry Perkins won’t be in Glendale, Ariz., to sing along with Katy Perry at halftime, but one good Perry deserves another, especially if Chef Perry focuses on providing healthy food ideas to those on restrictive diets. In his recipe for bacon-kale slaw, we find just enough hog goodness to entice finicky eaters to eat their kale without holding their noses.

It appears no one has told Chef Perry that both bacon and kale are trends of a bygone era—that being last year.

A dish bound to deflate

No Super Bowl XLIX feast would be considered hip without some homage to deflategate. You could take any recipe, and take two pounds per square inch out of the preparation, but that can get tricky (as well as require some decent math skills).

On the other hand, given that most souffles prepared by novice chefs generally deflate on their own, select the most challenging one and, no matter how careful you are, the end result will fall flat as an under-inflated football.

Before presenting to your guests, you can claim Bill Belichick opened and closed the oven door, causing the atmospheric mishap.

If you are neutral on the outcome of the big game, or just plain don’t care, offer up a dish that is satisfying to both teams’ hometowns.

While 2,496 miles apart, Boston and Seattle share a love for the creamy goodness of clam chowder. Both cities prefer the rich and hearty version, while those in New York or Rhode Island opt for a tomato broth or plain clam liquor.

If you want to tilt your recipe to appeal to Seahawk fans, try serving it in a hollowed-out bread bowl. For Patriot fans, go heavy on the oyster crackers.

Because the game is in Arizona

Arizona is home to some of the better places to eat fry bread—hunks of doughy goodness popularized from a Navajo tradition. And while it might not be the best place to dine on this Native American treat, the Universtiy of Phoenix Stadium has fry bread among its options at a number of the concession stands.

Given the limited seating capacity of the host site for SB 49, not to mention the expense of getting there and buying tickets, you can recreate the ambiance of this large, domed stadium by wowing your game guests with your own, homemade fry bread. After mastering the process, you can use it to create a Navajo taco or dust with powder sugar and eat it the way it is served at fairs and carnivals across the Southwest.

The combatants in Super Bowl XLIX come from cities that feature iconic beers. Rainier is the brew most commonly associated with the Emerald City, while Samuel Adams Boston Lager is the pride and joy of Beantown.

Every chili cook will tell you that beer can be an essential ingredient to achieve a rich taste, but beer can be used in a number of dishes that are suitable for game day.

This video offers three recipes for things that not only go great with beer, but work particularly well as essential ingredients in the preparation. Here you will find ideas for beer-can chicken, cheddar beer and pumpkin dip, and chocolate pretzel-beer toffee.

Putting aside the fact that kale is off the radar for 2015, you might want to offer something special to those guests still adhering to their New Year’s resolutions to eat healthier. This recipe for making kale chips satisfies the urge to eat something salty and crunchy without the fat and carbs.

From experience, this same process will work for squash by slicing a butternut squash into small rounds with a mandolin and lightly coating them with olive oil and salt. While the kale recipe calls for cooking those chips at 300 degrees, you want to turn the oven up to 400 degrees for the squash version. You will not miss potato chips after trying these.

What goes well with gin and juice?

If things go as planned, Snoop Dogg might be on the sidelines for Super Bowl LIV, LV, and beyond. Snoop’s son, Cordell Broadus, is one of the nation’s top high-school wide receiver recruits, currently deciding which college he will attend (and play football for) in the fall.

Until the day comes when his son is doing touchdown dances in the end zone (and one would expect them to be world class), Snoop will be home cooking up game-time snacks for his multitude of guests. In this rather offbeat clip, Snoop prepares his famous seven-layer dip and original recipe for chips. By original, we mean opening a bag.

Make mine a four-way

As a tribute to Russell Wilson’s place of birth—Cincinnati—you can show your admiration for this great quarterback by brewing up some chili, one of his city’s iconic dishes. If you have ever had chili in the Queen City, you are familiar with the lingo which indicates how you want your grub served.

According to Skyline Chili, considered by some to be the city’s best, the ordering is as follows: “three-way” for spaghetti covered with chili, and topped with shredded cheddar cheese; four- way, thesame as three-way with added onions or beans; and five-way, adding onions and beans.

if you want to do it correctly, follow a native Ohioan and Food Network regular Michael Symon (he’s actually from Cleveland, but don’t tell anyone) who is the master of the Midwestern classic.

Here are some added tips for becoming the perfect Super Bowl host: You’ll want to front load your less-starchy dishes, which means start serving them well before kickoff. Such a move will avoid having your invitees fall asleep before halftime. As gauche as it might seem, you might also go the plastic utensil and upscale paper plate route. Angry fans who have too much money on the game have been known to throw things at the TV when their bets go south. And while you are at it, invest in a great vacuum cleaner—you’re going to need it.