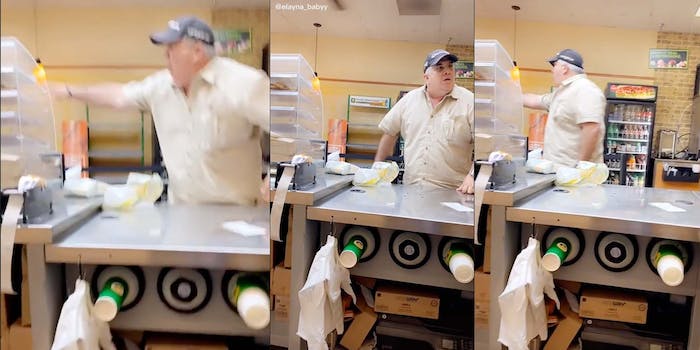 ‘It’s not that deep’: Customer berates Subway worker over sub of the day options in viral TikTok, sparking debate

'Poor customer service but he had no right to act crazy about it.'

In a TikTok posted this week, a Subway customer is seen yelling at employees and saying that the employees cursed in front of his daughter. The fight allegedly began over rotisserie chicken.

“I haven’t raised my voice until you raised your voice,” the employee tells him.

The TikTok, posted by @elayna_babyy, who works as Subway, has gotten more than 765,000 views.

In a follow-up video, the customer is seen leaning over the restaurant’s counter and yelling, while the employee tells him she doesn’t care “who the fuck [he] is.” Another woman then comes in to de-escalate the situation.

“Calm the fuck down,” the other woman says to the customer. “It is not that deep.” The man then asks for a refund for a sandwich.

The TikToker posted five follow-up videos explaining the situation: The man shown in the videos came in and ordered the sub of the day, which had chicken in it. @elayna_babyy, who took care of the man, told him that their store didn’t have chicken, so she could make him the sub with rotisserie chicken but would have to charge him full price—Subway’s subs of the day are discounted.

According to the TikToker, the man acknowledged what @elayna_babyy said by raising his eyebrows. When she rung him up, he got “upset.” The man then left and returned shortly after.

“I cannot vouch whether she had cursed at him or not,” @elayna_babyy said about her co-worker.

The man then asked for a refund for his sub and a replacement for another sandwich that he ordered, saying that the Subway employees burnt it.

“If we gave him a refund, he would think it was OK to come back into the store and yell and get another refund,” the TikToker said. “[I’d] rather give free food to people who are more deserving of it. Not someone who is going to disrespect me for 6 bucks,” she wrote in another TikTok caption.

Commenters on all of @elayna_babyy’s videos were divided: Some agreed that the man was being ridiculous, and others didn’t believe the TikToker didn’t intentionally make him mad.

“And people are asking why soooo many restaurants are short staffed,” commented @solarpegasus. “Because employees that used to work there are so tired of this right here.”

“Poor customer service but he had no right to act crazy about it,” wrote @hmmmque.

“Why does a customer have to pay more when you run out,” commented @jayguru69.

The Daily Dot has reached out to @elayna_babyy via TikTok comment and Subway via email.