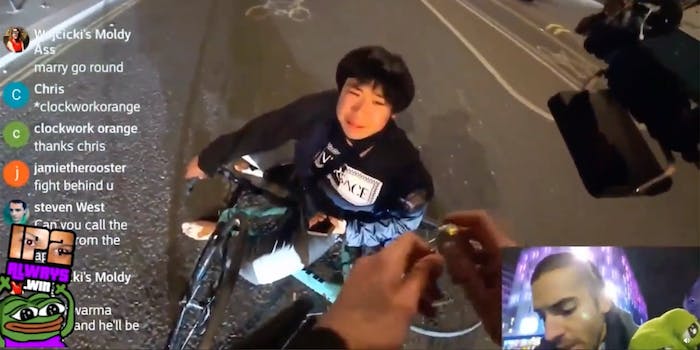 'I cannot thank Sherwin enough for what he did that night.'

In a viral video, a British streamer saves an Asian man from being attacked and having his bike stolen in Leicester Square in London.

According to the New Paper Singapore, Raymond Hing, 21, was alone during a late-night bike ride last month when he was beaten and attacked by an assailant looking to steal his bicycle.

The video, posted to Reddit’s popular r/PublicFreakout page this week, shows a London-based live-streamer/YouTuber named Sherwin coming to Hing’s aid, screaming at the assailant to “leave him alone.”

As Sherwin kept the assailant at bay with his loud protestations, more people arrived to see the commotion. Interestingly, the assailant desired the bicycle enough to retreat only when he realized he would be outnumbered, with his face recorded.

Hing asks him to call the police, as others began asking what happened.

Per the Strait Times, “the Metropolitan Police said they were called at 12.49 am ‘to reports of an attempted robbery in Whitcomb Street'” in Leicester Square.

“He came out of nowhere, punched me in the face, and pushed me to the ground. I had no time to react. He [told me] to give him the bike because he needed the money,” Hing told the New Paper. He also says that it appears the assailant had complimented him on his bike shortly before the attack and was likely casing him.

As some pointed out in the video’s comments, the attack and attempt theft did not appear racial in nature.

“I was just so relieved when I saw someone coming over to help. I cannot thank Sherwin enough for what he did that night,” said Hing, who TNP says has kept contact with Sherwin via social media. “(The attacker) may have been in dire financial circumstances, but that is no excuse to steal someone else’s bike.”

Sadly, it was discovered in another video that Sherwin’s angry mother had destroyed his equipment. Some of the comments suggest that the live-streamer was on the autism spectrum and that his home life and relationship with his mother were strained.

A GoFundMe was set up for Sherwin to recoup the costs of his lost equipment. The goal was 2,000 pounds Sterling, but fans of his heroism and well-wishers pushed the amount to over 8,000 pounds.

A gracious Sherwin wrote of the outpouring of support: “From bottom of my heart, thank you, thank you thank you x8000. I don’t know what to say… It’s unreal!!… It’s a lot of money! it’s lil scary because i don’t want to f*ck up or disappoint. but i’m so very grateful and thankful to all of you good people out there that care about me.”