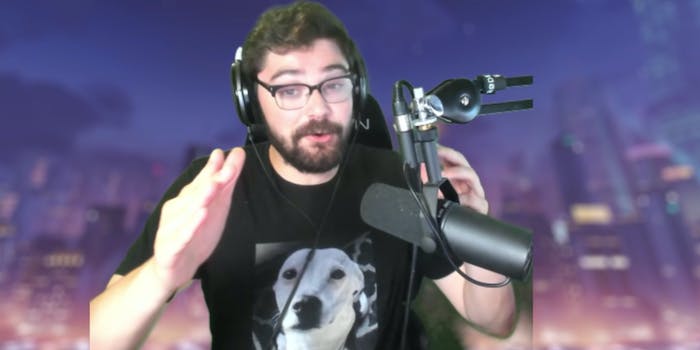 ‘No one loves you’: Streamer tells viewer to kill themself during broadcast

He expressed regret immediately after making the remarks.

An Overwatch streamer is under fire after telling a viewer to kill themself during a broadcast.

Samito took aim at the viewer after losing an Overwatch match, according to Dexerto.

“Never come back. No one loves you. Kill yourself,” he said after urging them to “get the f*ck out of my stream.”

Samito has since addressed the backlash, claiming that while he was in the wrong, critics are missing context. He posted a clip featuring what transpired in the immediate aftermath of his remarks.

In the clip, Samito apologizes and chalks his comments up to a “Freudian slip.” He says he was told to do the same the day before while he was playing Call of Duty.

“Don’t do that,” the self-proclaimed “world’s angriest gamer” urged, walking back his previous remarks. “Don’t do that. I apologize. I should not say that. … That was a f*cking COD line I heard last night.”

“As someone who has been in a situation like that before, where you’re questioning everything, it’s not OK to say,” he adds.

According to Dexerto, the first part of the clip, in which he tells the viewer to die by suicide, went viral on Reddit and prompted Overwatch team Florida Mayhem to drop him.

“The comments made by Samito on his recent stream are unacceptable and in no way represent the values of the Florida Mayhem,” it said in a May 28 statement posted to Twitter.

Florida Mayhem also revealed that it will be making a donation to the National Suicide Prevention Lifeline in response to the incident.

Samito also addressed the incident on YouTube, where he apologized again and revealed that he didn’t expect to be let go from Florida Mayhem, only to be fined. “I’m 100% accountable for my actions. I’m an idiot. I go full autopilot when I’m talking shit. That’s just my persona of an angry toxic gamer,” he said.

He also claimed the person who made the clip is a “known troll in my community trying to defame me” and that he intends to sue them. “I have every ground to sue because there have been many instances in the past where news agencies crop evidence and damage a brand. You need to put the whole picture in,” he said.

Samito said he is not looking to join another organization in the future and is looking forward to being himself. “It is very mentally taxing to be a part of mainstream media today. I can very confidently say I never want to do that sh*t for the rest of my damn life,” he said.