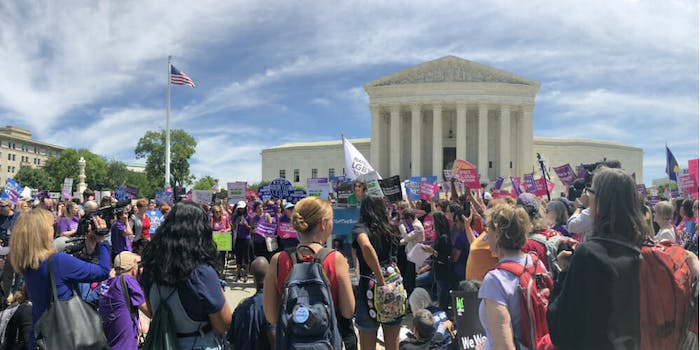 The majority of Americans don’t want Roe v. Wade overturned, and it shows.

Protesters gathered across the U.S. on Tuesday as a part of the #StopTheBans movement to push back against restrictive anti-abortion legislation sweeping the states.

Over the past few months, a number of unprecedented draconian anti-abortion laws have been passed in Georgia, Ohio, Mississippi, Kentucky, and Alabama. These laws ban abortion as early as six weeks into a pregnancy, before many people are aware they are pregnant. The Alabama law introduces a 99-year prison sentence for doctors who perform abortions and an all-out ban on abortion with no exceptions for rape or incest. The so-called “heartbeat” law in Georgia, which grants legal personhood to fetuses, could be used to prosecute people who travel to other states to get abortions. Doctors have expressed serious concerns that people will be investigated over miscarriages to determine if they are somehow at fault. More laws like these are in the works in other state legislatures, and anti-abortion advocates have said they are hoping to use these laws to overturn Roe v. Wade.

People are pushing back in person and online, however, with the #StopTheBans movement. On Tuesday, there were over 500 demonstrations in the states, as well as in Ottawa and Puerto Rico.

We'll be joining marches from coast to coast in today's national day of action. Politicians, take notice: If you come for our reproductive freedom, you'll have to get through ALL of us. pic.twitter.com/5bPi8slYeJ

The protest in Washington, D.C. was one of the largest, where people gathered outside of the Supreme Court. While many people protested in their home states, others traveled to D.C. to make their voices heard to the conservative-majority court that anti-abortion advocates are counting on.

That feeling when your outrage can’t fit on a sign. #StopTheBans pic.twitter.com/Z3jBW8dPZK

“Roe v. Wade saved my life.” Susan, age 70, just came up to me sobbing at the #StopTheBans action in front of the Supreme Court. Please LISTEN to her and Retweet to share her story! pic.twitter.com/bYKgPGxZWD

Many politicians also appeared at the demonstration in D.C., including seven 2020 Democratic presidential candidates. Rep. Jackie Speier (D-Calif.) was among those who addressed the crowd, and while politics is always personal in some way, Speier shared just how personal this issue is to her. “You know me, I am one of the one in four women who has had an abortion in this country,” said Speier, referencing the hashtag #YouKnowMe.

Today, I shared my story of my 2nd trimester abortion, a painful procedure that became necessary after the fetus I was carrying moved from my uterus to my vagina. I am not ashamed. Neither should anyone else be. Those who treat women like chattel should be ashamed. #StopTheBans pic.twitter.com/L8pOqrjddp

.@RepSpeier: “#YouKnowMe, I am one of the 1 in 4 women who has had an abortion in this country. We are not strangers. We are wives, mothers, sisters, friends. And I am not ashamed.” #StopTheBans pic.twitter.com/fHN2mSMXMz

There are more #StopTheBan demonstrations planned throughout the week; a guide to when and where events are being held can be found here.