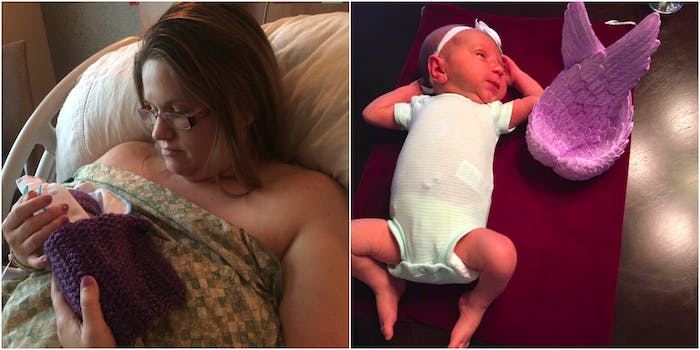 An abortion after 20 weeks is a heart-wrenching decision—it's never about 'ripping the baby out of the womb.'

The political climate, and recently the introduction of what amounts to federal “personhood” and “heartbeat” bills in Congress, have once again raised the issue of late-term abortion. In a presidential debate back in October, then-presidential candidate Donald Trump grotesquely, inaccurately defined a late-term abortion as when you “take the baby and rip the baby out of the womb of the mother just prior to the birth of the baby.”

Emboldened by such rhetoric and their majority in Congress, Republican lawmakers continue to build on these untruths with bills like H.R. 490, which would make abortion illegal once you can detect the fetus’ heartbeat. Never mind that a heartbeat can be found at six weeks, when many women don’t even know that they’re yet pregnant, or that a heartbeat is a far cry from viability, making such legislation thereby unconstitutional.

But what Trump and Republicans don’t think about are the real faces, the real bodies behind an issue that has a lot to do with grief and heart-wrenching decisions, and absolutely nothing to do with “ripping” out a baby. Many anti-abortion bills like H.R. 490 make no exceptions for rape or incest. They don’t even make exceptions for even stories like mine. Because I am one of those bodies who is still grieving.

For a long time, I struggled to get pregnant. When other treatments failed, my husband and I decided to travel from our home in Texas to the Czech Republic, where donor eggs cost around $6k as opposed to the U.S. norm of $20k. Last February, we transferred our two beautiful embryos. We were simultaneously over the moon and terrified when we found we were having twin girls. Every ultrasound made it more real. We learned our girls already had their own personalities: our little diva, Olivia, who made her presence known in every image; and our camera-shy cuddle bug, Catherine. We already loved them more fiercely than I ever thought possible.

Our 20-week anatomy scan came on a Friday in early June. I remember being anxious to get through it because, with twins, the 20-week mark is as safe as you can get in terms of miscarriage risks. After a routine scan, the doctor took over an hour to come in.

He asked me to sit down next to Peter before telling us that Baby B, our Catherine, had a number of issues, including an encephalocele (a neural tube defect, which we later found out was open and brain matter was leaking out), slow growth, small head size (eventually classified as microcephaly), a very large cleft lip/palate, and possibly fused digits.

We saw two additional specialists over the course of multiple appointments throughout the next 12 days. All of the appointments and scans confirmed our OB’s suspicions and more. Cate’s cerebellum was so underdeveloped that one doctor had trouble finding it. Her brain’s midline was shifted, which indicated “severe disorganization,” a strange phrase I will never forget. And her sac was growing and restricting the growth of Olivia’s sac. Both of our girls were in danger.

Our doctors counseled us throughout the ordeal. If I carried to term, the restriction on Olivia’s sac would likely mean an early delivery. If Catherine survived delivery, she would face a barrage of surgeries, starting with removing the encephalocele and placing her brain tissue back inside her skull. She would be severely disabled if she wasn’t a vegetable. And we didn’t know what an early delivery would mean for Olivia.

Our other option was a late-term abortion of one of our girls. Catherine’s death would likely mean a safe and healthy remaining pregnancy with Olivia.

I have always been pro-choice but said that abortion wasn’t a choice I would make for myself. But then I was told my children could both die if I didn’t do this. We got second and third opinions. We ran tests. There’s not a name for what happened with Cate’s development. Our doctors had never seen this combination of issues. It was one in a million. Almost literally. Our doctors’ diagnoses only got worse. We weren’t going to find later that they were wrong.

On June 22 at 3:30pm, the doctor let us see and hear Cate one last time. I remember she danced for us. And then, guided by ultrasound, the doctor injected a medication into Cate’s heart, stopping it. When they checked for a heartbeat 30 minutes later, the silence was deafening.

Then they found Olivia’s strong beating heart. We cried. We cried for Olivia’s survival and for Cate’s loss, our loss, Olivia’s loss.

We are the story of a late-term abortion. We are the issue that anti-choicers debate without knowing, without having been there. Our daughters’ lives are the lives they claim to value even though Cate wouldn’t have had a life, and Olivia might not have either. Ours are the children they would rather have seen both die needlessly because “abortion is murder.”

We decided to take our daughter’s pain and suffering upon ourselves. She passed away peacefully, feeling my love and hearing my heartbeat. Given the situation, I could ask for nothing better. This wasn’t a choice of convenience, and she wasn’t unwanted. Catherine was so wanted that it will always hurt that we can’t have her. But Olivia was wanted, too. And we wanted them to have a life that was actually lived. Quality of life is just as important as a beating heart.