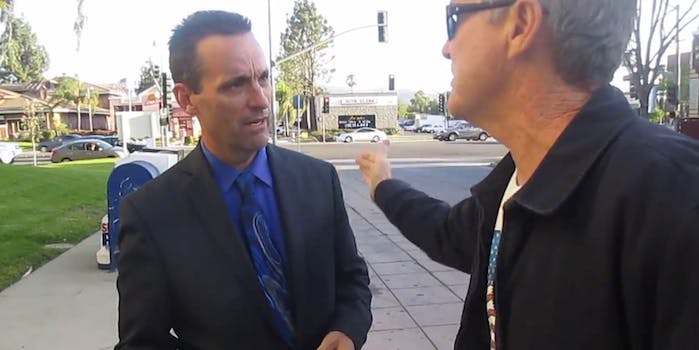 In a video uploaded to YouTube late last week, Rep. Steve Knight (R-Calif.) can be seen threatening a protestor by saying, “If you touch me again, I’ll drop your ass.”

The video starts with an anti-immigration protestor in front of Knight’s Simi Valley office shaking the hand of the congressman, who represents the northern section of Los Angeles County.

“You told me you didn’t vote for amnesty and you did,” said the protester, who is addressed in the video as “Mike,” giving Knight a tap on the shoulder after releasing the very firm-looking handshake. “I looked it up on the Internet. You lied to me.”

Apparently Knight, an Army veteran and former Los Angeles Police Department officer, didn’t appreciate the contact and leaned to tell the protestor, “If you touch me again, I’ll drop your ass.”

Since Knight said that while touching the protestor on the chest and arm, another member of the assembled group of demonstrators replied, “Well, don’t touch him.”

The protest was over Knight’s vote in favor of H.R. 240, a bill that the protesters believed granted “amnesty” to undocumented immigrants. The legislation was part of a gambit by Republicans to include provisions defunding President Obama‘s executive action on immigration granting over 4 million undocumented immigrants temporary protection from deportation. The provisions were attached to a bill paying for the operations of the Department of Homeland Security. Conservative immigration opponents hoped that by holding Department of Homeland Security funding hostage, Obama’s executive actions could be overturned.

The bill bounced back and forth between the House and Senate, due to the threat of a Democratic filibuster in the upper chamber, until the portion about immigration funding was stripped. Knight was one of the 75 Republicans who voted in favor of the “clean” bill.

Knight argued to the protesters that he didn’t vote for amnesty, which is technically correct. Much like bills about naming U.S. Post Offices in Iowa, the final version of H.R. 240 did not have any substantial effect on immigration policy. However, in the minds of protesters hoping Knight would have voted against any DHS-funding bill that didn’t block Obama’s immigration action, the vote was a betrayal.

After trying to explain his position to the assembled crowd, Knight sighed, “Good gosh, you just can’t win with this group.”