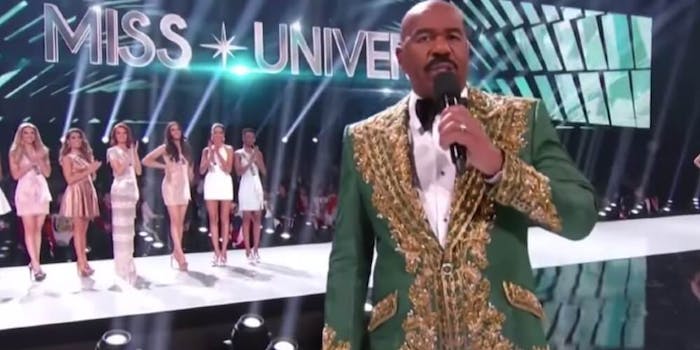 Twitter users are incensed over a comment Steve Harvey made about drug cartels while hosting the 2019 Miss Universe Passage.

The host made reference to a 2015 blunder when he mistakenly announced that Miss Colombia Gabriela Tafur had won the prize of Miss Universe—only to later realize that it was actually Miss Philipines who had won. In this year’s pageant, Tafur quipped that she had forgiven Harvey for the mix-up.

“You’ve forgiven me,” Harvey said. “The cartel has not. They’re not handling it the same way.”

Twitter users said the comment made light of violence in the country and perpetuated stereotypes about Latin America.

I like how @IAmSteveHarvey makes a joke about the cartel to #MissColombia and then cut to her package and she’s like “I’m a lawyer and have been fighting violence in my country.” Get it girl. And Steve, sit down man. #MissUniverse

“We are more than cartels. Your comment was very unfortunate and not funny at all … once again you are failing with us,” Twitter user @jsolanos1979 wrote.

@SteveHarveyFM We are more than cartels, your comment was very unfortunate and not funny at all, you should apologize to all colombians, yes, once again you are failing with us… #MissUniverse2019 #MissColombia pic.twitter.com/VMfn8MuPvo

That steve harvey comment about colombia and the CARTEL was disrespectuful! He should apologize! Thats not what we are, our artists, our landscapes, our athlets can speak LOUDER @MissUniverse #missuniverse2019 #MissColombia

Steve Harvey’s comment was so racist, Colombia is full of nature, landscapes, diverse culture, etc. and you gonna talk and call us NARCOS??? boomer fuck off #MissColombia #MissUniverse2019

It’s not the first time that a Miss Universe host has made a comment about drug cartels to a Colombian contestant. In 2001, David Letterman “joked” on air that Miss Colombia “swallowed 50 balloons full of heroin” for the talent competition.