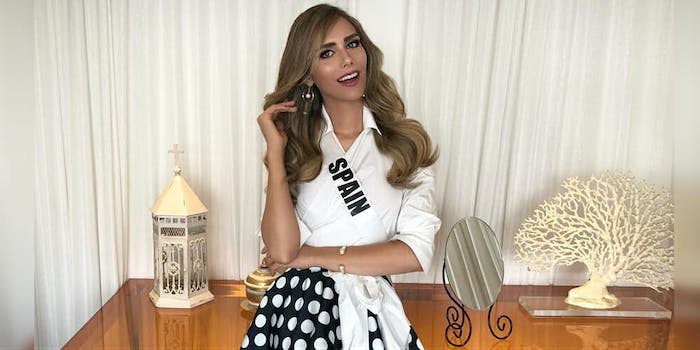 The first trans Miss Universe contestant didn’t win the crown, but she won the internet

‘This is for you, for those who have no visibility.’

The 2018 Miss Universe pageant was held on Sunday evening, and although she didn’t win, 27-year-old Angela Ponce made history as its first transgender contestant.

Ponce has been working as a model for several years, also competing for, but not winning, the title of Miss Spain in 2015. After years of hard work and dealing with discrimination in the industry, Ponce finally made it to the international level this year.

“I’m competing because it’s what I’ve wanted to do since I was a little girl,” Ponce told Time before the pageant on Sunday. “I’m showing that trans women can be whatever they want to be: a teacher, a mother, a doctor, a politician, and even Miss Universe.”

Ponce has described the obstacles she faced as a trans model. She would get a job offer, and have it rescinded when the client learned she was transgender and competed in pageants she wasn’t allowed to win. “In 2015, I competed in another pageant, Miss World, in Spain, but I found out on the day of the competition that their rules didn’t allow a transgender woman to win,” Ponce said to Time. “I had to go on and perform, and it felt horrible. But after I got to the Miss Universe final, Miss World changed their rules too. I changed the rules.”

The internet loved that she was breaking barriers.

They dedicated a special segment for Angela Ponce to acknowledge her, and recognize her representation. She is a woman, and in the eyes of the universe, she will always be a woman.

I'm so emotional right now. You made your community proud, Miss Spain! #MissUniverse

Until 2012, trans women weren’t allowed to compete in Miss Universe, and Ponce is the first to make it to the big stage since that ban was lifted. Before the competition on Sunday, she posted on Instagram in Spanish, “This is for you, for those who have no visibility, no voice, because we all deserve a world of respect, inclusion and freedom. And today I am here, proudly representing my nation, all women and human rights.”