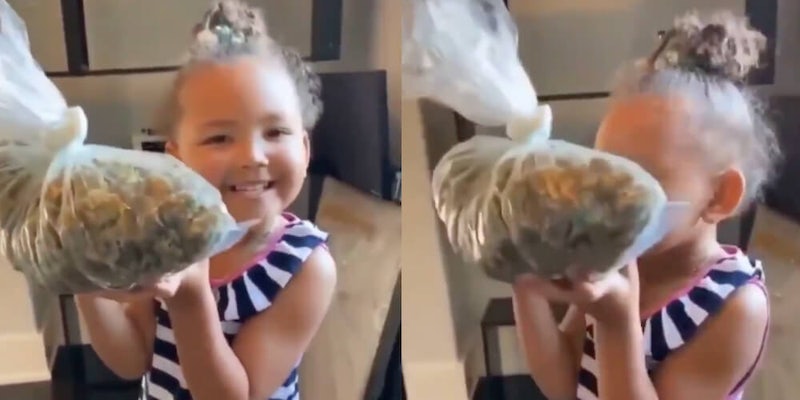 This must be the week of rappers making questionable decisions that involve their children.

After the nonsense that was T.I., rapper YG posted a video of himself handing his 3-year-old daughter, Harmony, a bag of what appears to be marijuana and asking her to smell it.

During the clip, which has since been deleted, the artist is seen lifting a large bag of marijuana and asking his daughter what’s in the bag.

YG then asks his daughter what the bag smells like.

The Internet is going crazy over YG allowing his daughter to pick up what seems to be "weed" yet calling it “broccoli” Are they overreacting? Cc @Gidi_Traffic pic.twitter.com/dIIpLn6gAo

Of course, the internet was divided.

Some people defended the rapper and compared his actions to that of parents who smoke cigarettes around their kids.

“Anyway so I came back to talk about that video of yg showing his daughter his bag of weed and her saying it’s broccoli, then him asking her to smell it and her saying it smells like broccoli. I saw that video myself and lemme tell you, THAT SHIT WAS FUNNY,” wrote Twitter user @thatbasicb_sam.

Most, however, noted that it wasn’t responsible for the rapper to expose his young daughter to drugs. And, they said, YG’s actions might get him in trouble with Child Protective Services (CPS).

“People are trying to justify YG showing his daughter his stash of weed by saying it’s legal in Cali, but why is he exposing his child to drugs,” wrote Twitter user @tosinn2.

People are trying to justify YG showing his daughter his stash of weed by saying it’s legal in Cali, but why is he exposing his child to drugs

Waittttt so YG recorded a video of him letting his daughter smell some weed and asking her what it smell like ? Smh

YG is a father to two girls: Harmony and a new baby named Vibe whose mother is his ex-girlfriend, Catelyn Sparks.