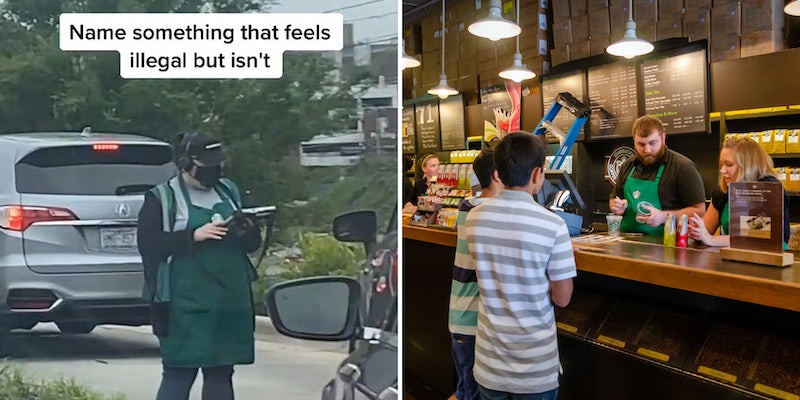 ‘Since when did Starbucks start doing this??’: Customer films Starbucks worker taking orders outside, sparking debate

'It’s hell for the employees.'

A TikToker recently filmed Starbucks workers taking orders from drive-thru customers who are still in line, going viral and unexpectedly starting a debate on the platform about the ethics of the situation.

The original TikTok, posted by user James (@itsjamesstarr), shows a Starbucks employee taking orders on a tablet from a customer who is in line at the drive-thru.

“Name something that feels illegal but isn’t,” James wrote in the text overlay of the TikTok.

The video currently has over 1.5 million views.

At first, some users jumped into the comments to simply inform James and other users on the site that this was relatively normal.

“since when did Starbucks start doing this??” James questioned in the comments section.

The answers from viewers were mixed.

“Current barista here! we’ve been doing this since august 2020,” a third added.

Quick-Service and Fast Casual Restaurant magazine reported on Starbucks’ plan to incorporate more tablet ordering in line in July of 2020, a method it said began during the early days of COVID. These comments seem to indicate that rollout for this program has been gradual.

As for why Starbucks was actually doing this, users were also unsure.

“A lot of places are doing it…it cuts down on drive thru times I think,” a second agreed.

This idea is corroborated by the same QSR article.

“…We’re able to get out of the store, get out in that line, put an order and in a queue much faster, and get those out-the-window times down and get the beverage and food items to the customer much quicker,” Starbucks COO Roz Brewer told QSR about the new tablet system.

Commenters under James’ video note that they’ve seen similar “line busting” in places like Chick-fil-A, Dutch Bros, Taco Bell, and a host of other locations.

While doing this may decrease time spent in line for customers, according to some users, it can be a negative experience for employees.

“The line goes by quick but gives little to no time for the cooks to breathe,” a commenter stated.

“Worked at canes and they sent me out multiple times in 108+ degrees, and during a monsoon storm,” shared another. “It’s hell for the employees.”

Being forced to work in the heat was a common thread through many comments.

“What y’all don’t understand is that it might be 100+degrees outside and they still make them go outside for a minimum wage,” a commenter wrote.

“I’m a barista in az and there is no amount of money they can pay me to start standing outside in 120 degree heat and do this,” another said.

The Daily Dot reached out to James via TikTok comment and to Starbucks via email.