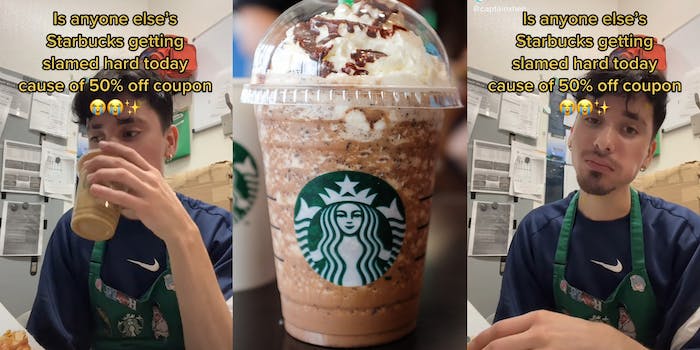 ‘Is anyone else’s Starbucks getting slammed hard today?’: Starbucks 50% off deal takes toll on barista in viral TikTok

‘What was corporate thinking?’

In a viral TikTok posted today, a Starbucks barista described getting “slammed” at work because of a new 50% off deal for iced drinks at Starbucks every Tuesday in July, sparking debate in the video’s comments section.

The viral video, which has over 50,800 views, was posted by TikToker Hen (@captainxhen). As previously reported by the Daily Dot, the TikToker has gone viral in the past for describing his experiences as a Starbucks barista. In his most recent viral TikTok, he films himself in his Starbucks apron in what appears to be a break room and says things have gotten busy at work recently due to a new 50% off deal.

“Is anyone else’s Starbucks getting [slammed] hard today cause of 50% off coupon,” the TikToker captioned the video. “Bruhh its been super busy and i work at a cafe Starbucks.”

The new deal mentioned in the video offers Starbucks Rewards members 50% off cold drinks, and is called “Summer TuesYays.” The offer is only available at some participating stores, excludes “ready to drink, bottled beverages and alcohol”, cannot be combined with other discounts, and is not applicable for delivery orders, according to the Starbucks website.

Users in the comments section of the viral TikTok debated the impact of the 50% off offer. Some users who claimed to be Starbucks employees shared their similar experiences with a sudden influx in work.

“I was on cold bar all day and lemme tell you today was NOT IT,” one user complained.

“Good time to be off on tuesdays,” another user commented.

Others related to the Starbucks workers, and some users even criticized Starbucks for implementing the deal.

“Srsly what was corporate thinking making it on a tuesday when most places are understaffed??” another argued.

On the flip side, many users in the comments section said they would be taking advantage of the deal.

“As a former barista I’m sorry besties but $3.95 for my favorite drink in a venti that I haven’t been able to afford is just too good of a deal,” one user said.

“Trust I will be there every Tuesday for the rest of July,” another replied.

In a follow-up video posted a few hours after his first video, the TikToker shared how he was holding up.: “Updated ladies we are still dying right now, down to 3 girlies pray will make it out tonight.”

The Daily Dot reached out to Starbucks via email and to TikToker Hen (@captainxhen) via TikTok comment but was not met with a response in time for the publication of this article.