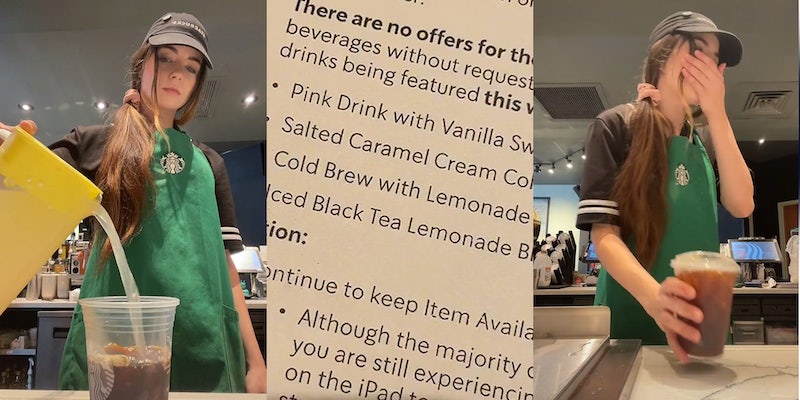 A Starbucks barista went viral on TikTok after posting her reaction to Starbucks’ new featured drink—cold brew with lemonade.

The 15-second clip starts off with the barista, Kay (@kayli.cernan), looking disgusted. The camera shifts over to the menu where one of the new drinks reads, “cold brew with lemonade.” As she makes the drink, she looks repulsed throughout the video. When she takes her first sip after making the concoction she recoils, gagging into her hand.

The video has racked up 1.3 million views since it was posted on July 30. There was a divide in the comments, with some agreeing that it didn’t appear to be appetizing.

“It was traumatizing to try,” one user wrote.

“I thought at first you were talking about salted caramel sweet cream and I was like??? That’s sounds good. Cold brew and lemonade is a no from me,” a second agreed.

“No but when you sip the first taste is kinda good and then the long lasting aftertaste is HELL,” a third stated.

Kay even reinforced how terrible it tasted in the comments, “like i just threw up in my mouth. the taste stayed in my mouth for So Long.”

“At my job we have this already but we add mashed berries to it and I’ve been told it tastes like tea, I hate it though,” one user noted.

“A spritz of lemon in iced coffee is a game changer but half lemonade in a cold brew is a felony,” another argued.

Other users disagreed, claiming that they think the beverage tastes good, especially when additional ingredients are involved.

“I love cold brew lemonade we make this at the coffee shop I work at,” a second added.

“Okay but hear me out, it’s really good with raw sugar or sweetener don’t knock it until you try it,” a third stated.

“Cold brew with lemonade is my favorite. I go to Panera specifically for it. Also – sparkling water, lemon and espresso,” a fourth concurred.