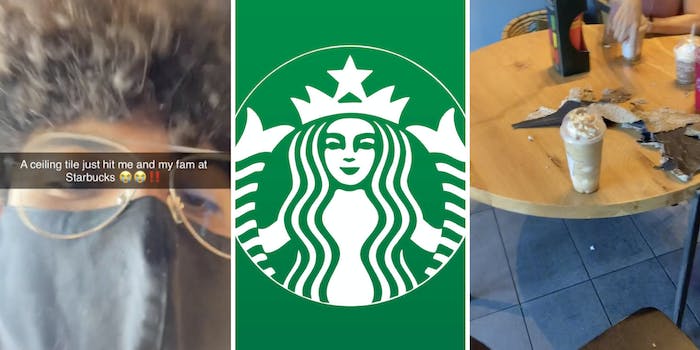 ‘Get that check’: TikToker says a ceiling tile fell on him at Starbucks

'I would be on the floor not taking TikToks.'

A customer says that a ceiling tile fell on him and his family while dining at Starbucks, prompting commenters to encourage him to sue.

Posted to TikTok by Mauricio (@plasticb) on May 22, he shares a video of the fallen ceiling tile in multiple pieces on the table where his family was sitting and on the floor. The text overlay reads, “A ceiling tile just fell on me and my fam at Starbucks.”

In the comments, many users encouraged Mauricio not to accept anything the store gave as an apology, instead suggesting a lawsuit.

“DON’T ACCEPT ANYTHING THEY OFFER YOU AT THE STORE, LAWYER UP ASAP,” one commenter urged.

Others said that Mauricio should lay on the floor and claim that he was injured to “secure the bag” instead of filming the aftermath.

“Bro I would have been on the floor passed out why did you start recording think about the bag first rather than TikTok,” one user said.

“Nah cause i woulda been on the floor. paramedics, fire truck, squad cars.. all of it on scene,” another wrote.

“I would be on the floor not taking TikToks,” a third added.

Mauricio responded to the suggestion in a comment, saying, “I wasn’t taking TikToks lmao..I was recording for evidence and plus Starbucks has cameras there.”

The Daily Dot has reached out to Mauricio via TikTok comment and to Starbucks via email for comment on this story.