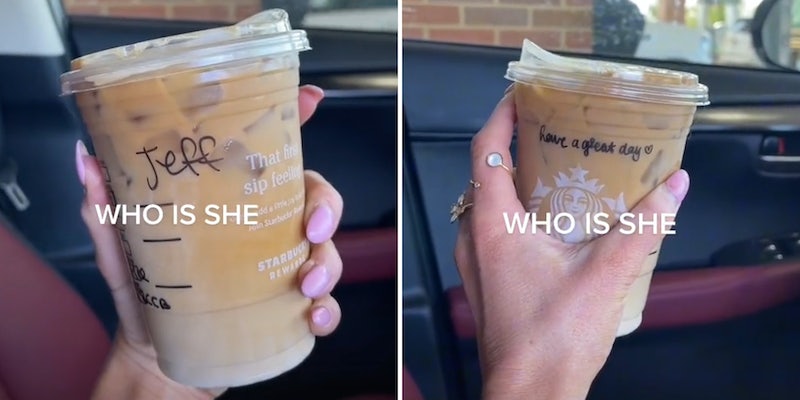 'I mean idgaf but can u at least flirt back so our coffee is free.'

A woman on TikTok says Starbucks baristas flirt “so hard” with her boyfriend every time she doesn’t go into the coffee shop with him.

The woman, Kiley Miller (@fitbykiki), shows her boyfriend’s Starbucks cup in a viral video. Someone, presumably a barista, wrote “have a great day” with a heart on the side of the cup.

“Are they flirting or are they just being nice? I see a heart,” Miller says in the video.

The video’s on-screen text says “WHO IS SHE” in all caps. Meanwhile, the caption reads, “i mean idgaf but can u at least flirt back so our coffee is free.”

As of Thursday, the video received about 1.7 million views, and viewers were divided on whether the handwritten message was flirtatious.

“FLIRTING!!!!” one viewer commented on the video.

“As a barista they are def flirting,” another viewer commented.

One viewer didn’t agree, saying, “Lmfaooo no at my store some baristas write on the cup cuz we gotta engage with customers/be friendly nd this just one way of doing so.”

Several other baristas confirmed in the comments that it’s common for baristas to leave messages on cups just to be nice.

“Sometimes at starbucks when we have down time we prewrite the little notes on cups/bags so that it could make someone’s day,” one user said.

“I pre-write a million little messages on a bunch of cups before peak & the thought that someone thinks I’m flirting with them never crossed my mind,” another user wrote.

A third user commented, “I work at Stabrhcks. A lot of the time we write on cups/lids in advance so we just grab one and make someone’s drink with it.”

Whether the message is flirty or just being nice, some viewers/baristas said it’s also a tactic for increasing tips.

“I do this so we can get our connections scores up and tips,” one viewer said.

“They trying working for tips,” another viewer said.

The Daily Dot reached out to user @fitbykiki via TikTok comment.