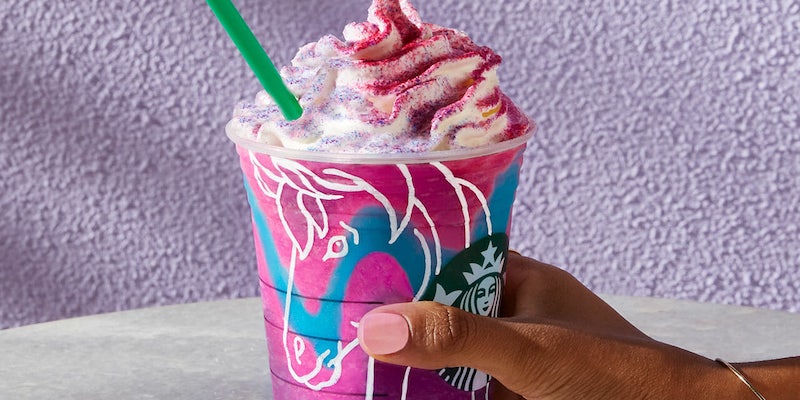 'For the love of God, don't get the Unicorn Frappuccino.'

It’s no surprise that the unicorn trend is getting somewhat excessive when it comes to rainbow-colored foods, but the craze surrounding Starbucks’ new Unicorn Frappuccino is really pushing people over the edge.

The limited-edition drink officially debuted Wednesday and has since taken social media—and thousands of Starbucks locations in the U.S.—by storm. After just one day, Braden Burson, a 19-year-old Starbucks barista in Colorado, told the Associated Press that he’s had enough.

“If you love us as baristas, don’t order it,” Burson says. “For the love of God and everything that is good, don’t get the Unicorn Frappuccino.”

The Unicorn Frappuccino is made with a “sweet dusting of pink powder” blended into a Frappuccino with mango syrup in a “sour blue drizzle.” It is finished with vanilla whipped cream and a sprinkle of more unidentifiable pink dust. The whole concoction contains a whopping 76 grams of sugar. That’s the equivalent of roughly seven Krispy Kreme donuts, for reference.

Apparently, the scene at Burson’s place of work was overwhelming, with orders for the Unicorn Frap piling up one after the other from customers at the counter and drive-thru.

“I have unicorn crap all in my hair and in my nose, my hands are completely sticky,” Burson said in the video. “I have never been so stressed out in my entire life.”

Other baristas and unimpressed Starbucks fans alike were also quick to express their disdain for the new drink.

Dude my store completely sold out of all of it in 6 hours. We were supposed to have it til the 23rd lmao nope but ppl still come asking

ur wcw bought a unicorn frappuccino

I wonder if somewhere there is a unicorn drinking a human frappuccino. Bet it tastes like Netflix and debt.

The craze should last until the drink’s promotional period is over, this Sunday, but the magic of the unicorn trend certainly isn’t dead yet.