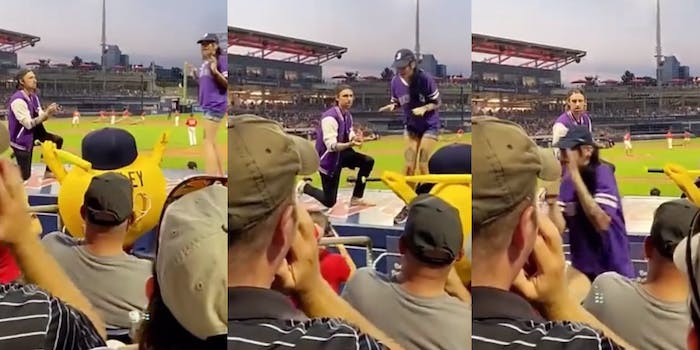 Viral video shows woman running away as man proposes to her, sparking debate about public proposals

The crowd cheers and urges her to 'say yes' before she makes a run for it.

A stadium proposal gone wrong was captured for the world to witness when a would-be groom got down on one knee at a baseball game in Worcester, Massachusetts’ recently completed Polar Park.

The doomed stadium proposal played out in front of hundreds of fans, horrifying viewers and sparking a conversation about public proposals. It even made it onto the Jumbotron, projecting what is likely one of the couple’s most difficult memories to a stadium full of people.

Footage of the rejection was shared to the Polar Park Instagram page, where it gained more than 140,000 views over the course of several days. People can’t seem to stop watching the brutal moment unfold.

The video itself is short, raw, and painful to watch. It sees a man, decked out in purple, white, and black, sink to a knee on a raised area in front of the stands. In the background, a massive screen projects his vulnerable moment to the rest of the stadium. His would-be bride, also dripping with purple and white attire, stands a few feet in front of the man as he lifts a small ring box toward her and pops the question.

Her reaction is immediate and devastating. The woman raises her hands to her face, horror evident in every movement, and shakes her head in a panic. Even as the crowd cheers and urges her to “say yes,” the woman flees to the edge of the raised area, before lowering herself onto the stairs and making a run for it. The man is left, still on one knee, looking utterly heartbroken.

Viewers found themselves split between a number of reactions. Many were too rooted in second-hand embarrassment to process much else, so they simply shared their sympathy for the man—and his petrified would-be-bride. They shared “prayers for our king” and saluted him as a “fallen soldier.”

A conversation over whether or not the moment was staged quickly overtook the comment section, but the gobsmacked look on the man’s face—combined with the horrified look on his girlfriend’s—seemed to convince most people of its authenticity.

The remainder of conversations boiled down to a single point: “That’s why you don’t propose in public.”

Numerous people pled with the public at large to stop proposing at ball games. “Ew public proposal at polar park,” one user wrote. “Girl did the right thing…”

Smiley Ball, the WooSox team mascot, was a witness to the “massacre,” a detail many viewers couldn’t help but fixate on. The bright yellow ball was even forced to move out of the way of the fleeing woman. The mascot’s perpetually smiling face was the cherry on top for many people, who celebrated his “cold” reaction.

Whether or not the video was staged, it certainly sparked a conversation. If the result is a downturn in public stadium proposals, this couple may just have done the world a service.