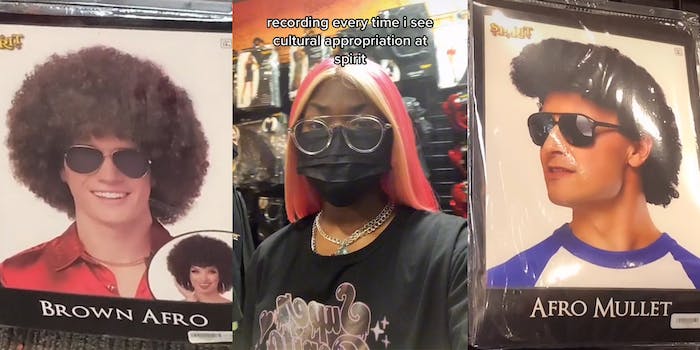 ‘Since when is Black hair a costume?’: TikToker puts Spirit Halloween on blast for for culturally appropriative costumes

A TikToker’s viral video pointed out how wigs in Black hairstyles are appropriated in Spirit Halloween’s costume selection.

Captioned, “Do better,” the short video amassed over 177,300 views and 43,300 likes since being posted on Monday by @courtwashere.

The video zooms in on various costume wigs in traditionally Black hairstyles with labels like “Dark Magic Dreads” and “Afro Mullets.” All of the models sporting the wigs on the costume tags are white. Some of the other costumes @courtwashere points to are furry legwarmers and an ancient Egyptian section.

As Halloween is fast approaching, the debate over culturally appropriative costumes rages on once again. Spirit Halloween has come under fire in the past, specifically in 2018 for selling “Native American costumes.”

Most of the 958 comments express frustration over the problematic costume section.

“Since when is Black hair a costume?” @yve5s questioned.

“Voodoo is dark magic but then crystals and horoscopes are so aesthetic,” another user, @crystalcastlesfanpage444, said.

Others expressed confusion over how certain kinds of costumes were culturally appropriative and debated if it was OK to dress up as ancient civilizations.

“As an Egyptian, it’s not a big deal. That sort of ‘culture’ was exclusive too the rich. Plus our ancestors are made up of numerous tribes (includes Arabs),” @gengokochan responded.

If you’re wondering if your costume is culturally appropriative, here’s a guide.

The Daily Dot has reached out to @courtwashere and Spirit Halloween for comment.