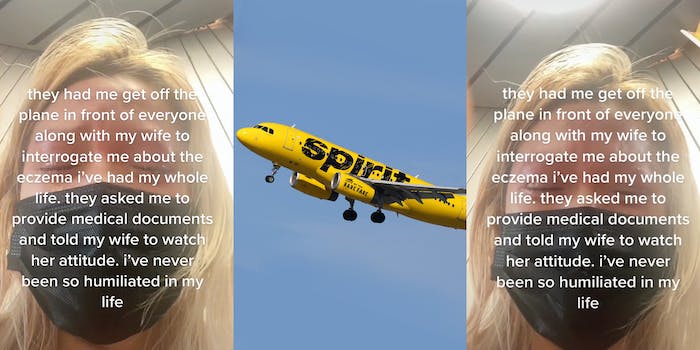 ‘Everyone with a visible non-contagious skin condition has been anticipating this’: TikToker says she was forced off Spirit Airlines flight after chronic eczema was mistaken for monkeypox

'Maybe teach your employees what monkeypox looks like before you catch hundreds of medical discrimination cases.'

In the aftermath of the COVID-19 pandemic, it’s difficult to not feel a little anxious whenever alarms start sounding about a potentially life-threatening new infectious disease. So once word of monkeypox began circulating news outlets and then social media posts with imagery of blisters, bumps, and skin lesions on people’s bodies, many folks were concerned.

Since monkeypox is associated with such visceral visuals, it was only a matter of time before other skin conditions folks have, like eczema, were wrongfully mistaken by untrained eyes as monkeypox. At least that’s what TikToker Jacqueline (@jacqueline.ngu) said happened to her when she was kicked off of a flight because it was suspected she potentially carried the smallpox virus variant.

@jacqueline.ngu misinformation leads to discrimnation/hostility. everyone with a visible non-contagious skin condition has been anticipating this #monkeypox#eczema ♬ i’m Peppa Pig – funny

In a caption for the now-viral clip, the TikToker wrote, “misinformation leads to discrimination/hostility. everyone with a non-contagious skin condition has been anticipating this #monkeypox#eczema.”

Jacqueline explains via text overlay that she was forced off the plane before being questioned about her skin condition.

“They had me get off the plane in front of everyone along with my wife to interrogate me about the eczema i’ve had my whole life,” she wrote over the 8-second clip of her in clear distress over the situation. “They asked me to provide medical documents and told my wife to watch her attitude. I’ve never been so humiliated in my life.”

The agency says that the first ever recorded case of monkeypox occurred “in 1958 when two outbreaks of a pox-like disease occurred in colonies of monkeys kept for research.” Even though the name is associated with monkeys, it’s still unknown where or how the disease originated.

The first time a human ever contracted it was in 1970, and prior to the 2022 cases that gained international attention, there were several reports of monkeypox cases in West African countries, with most other cases outside of this region occurring in individuals who traveled internationally to regions that import animals.

As far as symptoms go, the CDC says, “People with monkeypox get a rash that may be located on or near the genitals (penis, testicles, labia, and vagina) or anus (butthole) and could be on other areas like the hands, feet, chest, face, or mouth.”

The CDC notes that the those infected with monkeypox get a rash that may be located on or near the genitals, hands, feet, chest, face, or mouth. The rash has a progression of different stages until it eventually scabs before healing.

Jacqueline called out the airline that removed her from her flight, Spirit, in the comments section of the post for not researching the difference between Eczema and Monkeypox. “@Spirit Airlines maybe teach your employees what monkeypox looks like before you catch hundreds of medical discrimination cases,” she wrote.

Several users who saw her post responded with their own instances of discrimination based on skin conditions.

“As an adult with cystic acne I have been scared, I’ve been trying so hard to cover up out of fear. Sorry this had to happen to you :(,” one user wrote.

“People used to bully me thinking my eczema was contagious and I’m terrified it’s gonna happen again,” another worried.

“I am waiting on this to happen to me,” a third said. “I have eczema as well and the sun actually makes me break out.”

An additional TikToker added, “I have eczema, HS [Hidradenitis suppurativa], and cystic acne, the trifecta of looking like I have monkey pox and I’m terrified.”

“Its gonna be a long pants/long sleeve summer for the psoriasis/eczema crew,” one viewer suggested.

Others were outraged at Spirit’s demand to provide medical records on the spot.

“I have psoriasis… the idea of this happening in an airport… how would you suddenly provide documentation?? Like no one carries that,” a third argued.

“They can’t just demand medical records without stating it’s a requirement prior to flying,” an additional TikToker claimed. “This is gonna be a mess. Sorry you experienced this.”

The Daily Dot has reached out to @jacqueline.ngu on TikTok, and Spirit Airlines via email and TikTok for further comment.