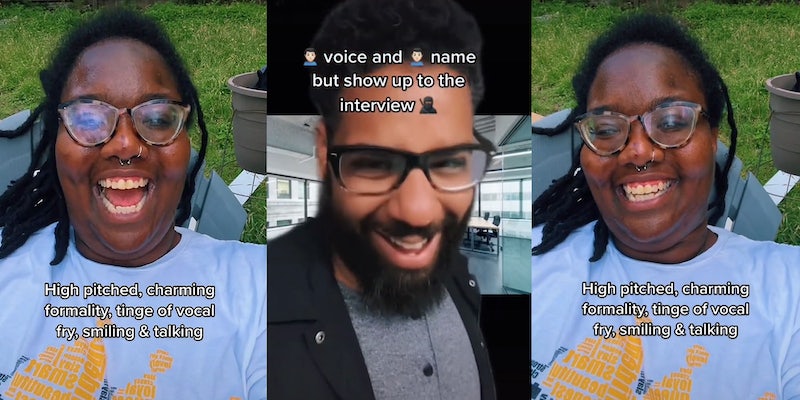 'We all understood the assignment!'

A Black TikToker is drawing attention to code-switching in a video that’s resonating deeply with her followers.

Serita (@seritafonta) made a stitch with another TikToker’s video about using a white name and white voice prior to showing up for in-person interviews. Serita gave her own example of how she “sounds white” on the phone in similar situations.

“High pitched, charming formality, tinge of vocal fry, smiling & talking,” she explained in the text overlay before deploying those techniques while pretending to have a phone conversation.

“The day I learned ‘this is she’ it was game over,” she said.

Code-switching is the process of changing one’s voice and language, sometimes among other things, in order to better match those around them to be treated a certain way.

In the U.S., this often refers to people of color going out of their way to sound “white” due to racial biases that cause employers to treat whiteness as the norm and anything outside of the norm as improper, particularly in professional settings.

Serita’s video sparked discussion over the fact that code-switching is something Black people, in particular, do to get hired in certain situations. Viewers chimed in with their own stories of code-switching in the work place.

“Shout out to the blk people that understand you can ‘talk whiite’ and [not] be offended by the observation,” @goodmomlife said. “Being able to turn it off is a flex tho.”

“I love pulling out my white voice it’s like a fun little party trick,” added @ameegaruh.

According to a 2019 Pew Research Center survey, between 37 and 48% of Black adults say they frequently feel the need to code-switch, with those who have a college degree feeling more pressured to do so.

“I’ve been code-switching pretty much all my life as a way to navigate predominately white spaces with some semblance of safety and respect,” Serita told the Daily Dot. “Black and Brown folks shouldn’t have to do this to be considered as a serious candidate, and the ‘shock’ hiring managers experience is really a reflection on them and their biases.”