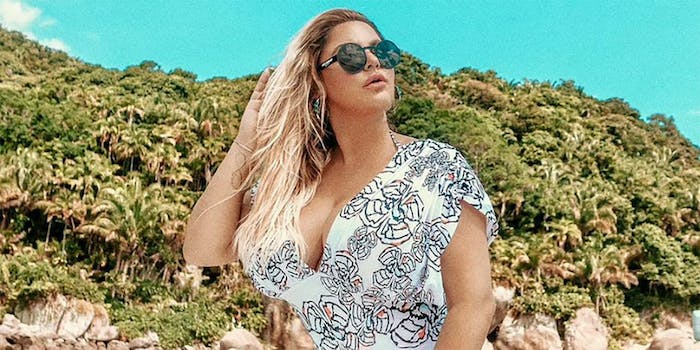 ‘Why shouldn’t I?’: Son creates OnlyFans for Instagram model mom

Lucene Duarte's son capitalizes on her almost a million followers.

A London-based model and self-described “lifestyle influencer,” already active on both Instagram and YouTube, has created an OnlyFans account with the help of her 19-year-old son—who reportedly is taking a cut of his mom’s earnings.

The story, titillating a number of tabloid readers on Monday, involves Lucene Duarte, whose Instagram account has close to a million followers. According to the Mirror, the idea for Duarte to join the platform came from her 19-year-old son, Leonardo Hathaway, who is also a London-based model.

The Mirror noted that Duarte, “has previously been featured in men’s magazines such as Playboy Portugal and Australia’s FHM,” and she also won a contest that the tabloids especially enjoyed discussing: The Miss Bumbum World contest in 2019.

“We have an incredible relationship between mother and child,” Leonardo reportedly said. “I have to support her choices, just as she supports mine. When asked if I support her, I always ask back: ‘Why shouldn’t I?’”

The Mirror article continued by contending Hathaway said that “he opened the account for his parent on the adult subscription site to help push his mum further on in her career—and in the hopes he might earn a little extra pocket money as well.”

The New York Post, also covering Duarte’s move to the platform, noted, “And for laying the foundation for his mom’s OnlyFans windfall, Hathaway will reportedly be helping himself to a handsome handful of her hard-earned income.”

Duarte was recently featured in the Vietnamese edition of Harper’s Bazaar, with a number of photos from the article featured on her Instagram account. In the article, she talks about being name queen of Carnaval in Sao Paulo, Brazil for 2020—a title she still holds due to the pandemic.

That interview included a question which began, “The fashion world will think you are a bit round,” before pointing out, “But you still go on becoming a successful model. Where is the secret?”

She responded in part by saying (according to Google Translate), “Women are increasingly fighting for their health, but cannot keep themselves under the fashion laws. To be honest, I am very comfortable with my body curves.” She also noted, “You can still be beautiful and sexy without killing yourself!”

The article also asked her about her success on social media, to which she responded, “Just be yourself. And I share my life experiences with everyone. The more real you are, the more people care for you. I get a lot of thank you messages for proving that I don’t need to be skinny to be successful. I am always touched when I see 10, 12, 14 year old girls telling them to love them and get inspired by me.”

The Daily Dot has reached out to Duarte.