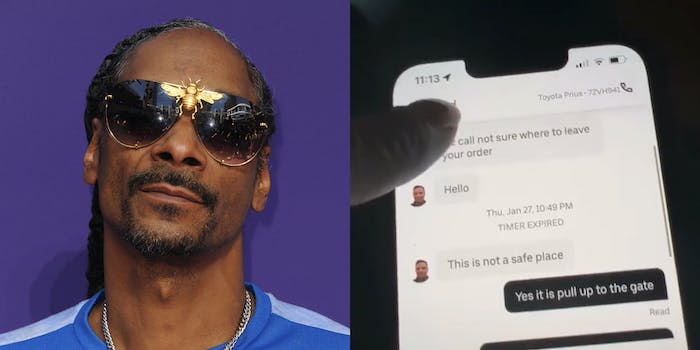 'First time snoop say anything that I don’t stan.'

Snoop Dogg put an Uber Eats driver on blast in a now-viral video after the driver failed to fulfill his food delivery.

“Motherfucker from Uber Eats didn’t bring my fuckin’ food,” Snoop Dogg says in a video, reposted by the aggregate hip-hop and rap TikTok account @rap. The rapper scrolls through his conversation with the driver on the Uber Eats app.

After arriving with his food, the driver told Snoop Dogg that he was there and continued to message him after not receiving a response, according to the messages.

“Plz call not sure where to leave your order,” the driver messaged Snoop Dogg. “This is not a safe place.”

Snoop Dogg responded, “yes it is” after eight minutes and told the driver to “[drop] off the food [he] paid” for in a specific location.

“Punk motherfucker,” the rapper says in the video while looking at the messages. “Where my food at?”

@rap’s video received nearly 5 million views. Many of the comments side with the driver: “you took 8+ minutes to reply your fault,” @betospcc commented.

“Well he tried to give you your food you answered late and he didn’t feel safe,” @msanonymous112 wrote.

“You waited 8+ minutes to respond there is a limit on wait, time is money. UE ain’t no charity,” @lunadalight commented. They also commented saying that the video was the “first time” Snoop Dogg said something the TikToker didn’t “stan.”

Some were confused about why the driver said that the location in which he was dropping off the rapper’s food wasn’t safe.

“Bro was at his trap house or sum,” @dontberacist123 joked.

@melaninpoppin00, who identified themselves as a delivery driver, offered insight on delivering to locations in which they didn’t feel safe.

“I delivered to a hotel and there were men outside it didn’t look safe, so they told me to go and they’ll issue a refund,” they wrote.

Others thought about the driver’s perspective.

“Forgot to blur his license plate,” @_proud.patriot_ pointed out. The man’s name is also shown in the video.

“Just wait till dude that took his food goes online and sees this video,” @thomasjohnsom wrote.

A spokesperson for Uber Eats told the Daily Dot in a statement: “We truly regret Snoop Dogg’s frustrating experience. We have reached out to apologize and refunded him for the order.”

The Daily Dot has reached out to Snoop Dogg and @rap via email.