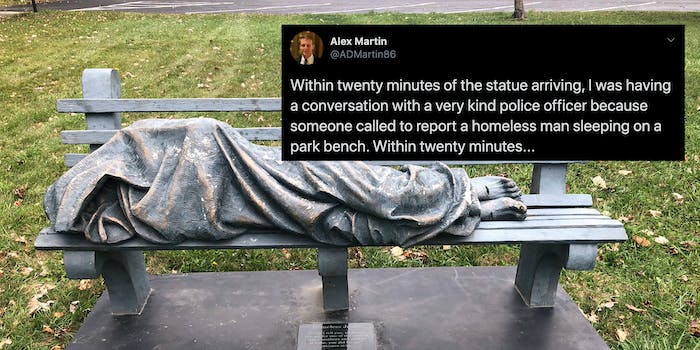 Someone called the police on a ‘homeless Jesus’ statue

The statue has sparked controversy, both online and in real life.

A bronze casted statue of a homeless Jesus sleeping on a park bench that was recently installed by a Cleveland church has sparked widespread response, both online and in real life.

While the church’s post about the statue received backlash online, someone also called the police on the statue within just 20 minutes of its arrival, mistaking it for an actual sleeping homeless person.

The statue, called “Homeless Jesus” and created by Canadian sculptor Timothy Schmalz, depicts a man said to be Jesus, wrapped up in cloth with only his feet exposed, as he is sleeping on a park bench (which is part of the statue). The sculpture was first installed at the University of Toronto in 2013, and it has since been installed at numerous locations around the world. Its most recent location is at the St. Barnabas Bay Village Episcopal Church in Cleveland.

According to WECT 6 News, Schmalz made “Homeless Jesus” to “dignify and raise awareness of the homeless in the community.” It was the hope of the artist that by placing the statues in busy locations, people who passed by would be inspired to help others.

Despite his intentions, the art piece has sparked backlash, both online and in real life. A priest at St. Barnabas Church tweeted that police were called “within twenty minutes of the statue arriving.”

“I was having a conversation with a very kind police officer because someone called to report a homeless man sleeping on a park bench. Within twenty minutes…” he wrote.

Additionally, the church’s photos of the statue that were posted to Twitter caused outrage for many who feel it is a performative gesture and that Jesus on a bench takes up space real homeless people could use to sleep on.

“If you don’t see the irony in this I fear for you,” one user replied.

“Anti-homeless architecture to raise awareness of homelessness,” another said.

Others argued that the statue may have gone widely misunderstood.

“The artist donated the statue so the city didn’t waste any money and it sure as hell got you all to talk about homelessness which I assume is one of the goals,” one wrote. “Homeless people need homes not more benches to sleep on for all those on here complaining about the lack of accessibility to this bench for said Homeless to sleep on.”

In a follow-up tweet, in an apparent attempt to alleviate some controversy, the church announced it would be taking donations to help aid homeless people within the community.

“Every penny raised will be used to feed, clothe, and house those in need,” it wrote. “Hopefully some good will come from all this.”

This is not the first time the statue has caused such controversy either. According to NPR, after the statue was placed at a North Carolina church in 2014, one woman also called the police on it, while other disconcerted neighbors of the church wrote letters explaining why it “creeped them out” and should be removed.