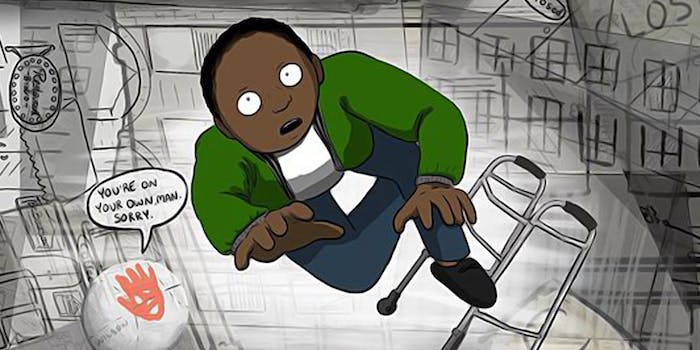 This unlikely duo is flipping the switch on what it means to be unhoused amid the pandemic.

Katy Fishell’s Instagram account, Sex is Weird, portrays stories of sex in all its awkward glory. She illustrates moments of spontaneous lactation and that strange withering thing boobs do when you lay on your side. Her inspiration is sometimes autobiographical, sometimes sourced from anonymous submissions.

But lately, Fishell has begun to share cartoons with her nearly 50,000 followers portray situations far more uncomfortable than any sweaty naked mishap. Fishell is co-authoring a series with Theo Henderson on homelessness.

Henderson, who lives in Los Angeles and is currently unhoused, is the creator and host of We the Unhoused, a podcast where he interviews others who’ve lost housing in order to shed light on homelessness. When discussing this issue, however, he prefers the term unhoused.

“The mainstream media has used homeless as a pejorative and it dehumanizes the unhoused community,” Henderson told the Daily Dot. “When I use the word unhoused, I’m getting my agency back.”

After coming across Henderson’s podcast, Fishell reached out to propose a collaboration. Henderson offered his idea to juxtapose their experiences in quarantine. “A Tale of Two Cities,” he suggested.

The two exchanged their stories of quarantine over the phone, and a side-by-side comic depicting their two realities was born.

For the first few panels, their stories split the screen. Fishell’s story, however, takes up less space as the story goes on. In the final panels, the cartoon centers Henderson’s experience completely, with Fishell nowhere to be found. It’s a choice that feels appropriate, as Henderson’s struggle to access normal everyday needs like affordable food and a bathroom outweigh Fishell’s frustration at being stuck at home watching movies every night.

And yet, the cartoon is so effective because it presents these two realities without judgment. There is no editorial commentary, nor is there a call to action—though Fishell does share Henderson’s Venmo and the Patreon account for We the Unhoused in her caption. The comic itself is simply two personal, lived experiences, presented for the audience to digest and assimilate on their own. The effect is simple yet devastating, as reflected by its resounding success. As of the writing of this article, the cartoon has accumulated nearly 50,000 likes on the Sex is Weird Instagram page and more than 32,000 likes on Fishell’s personal Instagram page.

“[This medium] lets people sit with an idea for a moment,” Fishell told the Daily Dot. “It’s just more powerful than a statistic or factoid. Cartoons are digestible and accessible.”

According to Henderson, the comic has also been received with an overwhelmingly positive response from members of the unhoused community. Said Henderson, “[Unhoused people] have contacted me through Instagram, and they were very happy. They feel that they are not alone.”

Fishell and Henderson have committed to putting out a new comic every month with the long-term goal of co-authoring a book.

Their most recent installment depicts Henderson’s experience of being assaulted by three men outside a bar.

In the comic, Henderson’s narrative is challenged by housed bystanders who question why he chose to be where he was, rationalize the behaviors of his attackers, and pick apart his response.

If you equate success strictly with a tally of likes, the second comic was received with less thunderous applause. But according to Henderson the quality of the response to the second installment in the series was richer. “I got much more nuanced responses. People kept contacting me about the second comic,” said Henderson.

He added, “It’s starting a conversation. The first comic was basically a shock that the unhoused exist and we have these obstacles to overcome. The second one is a little bit more uncomfortable because it talks about housed people doing violent acts, which is a different conversation point. [The media shows] unhoused violent acts but you don’t hear much media coverage about [violence towards the unhoused].”

According to Fishell, the comic actually did better than many of her regular Sex is Weird posts. She shared Henderson’s sentiment about the quality of the response. She added, “I was very excited to see how people were engaging with it. I think the conversation will just improve and become richer, the more content we produce.”

Henderson, whose background is in education, shares Fishell’s hope for the long term effect of sharing these stories. He’s currently planning a documentary around the theme, “Black Unhoused Lives Matter.” He said, “I want people to come out of the realm of darkness so a lot of times I say, ‘May we meet in the light of understanding.’”

We the Unhoused is available on Soundcloud, Apple Podcasts, and Spotify.