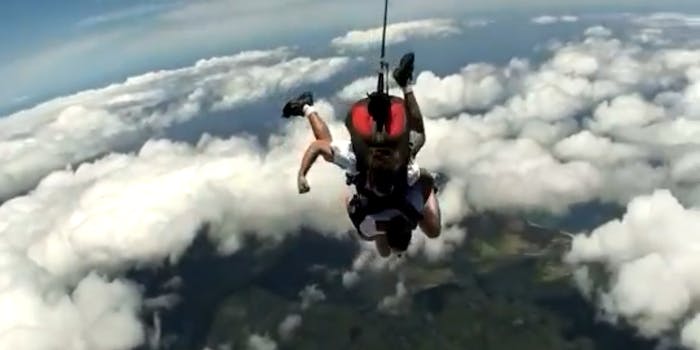 What’s the only thing scarier than tumbling out of a plane at 10,000 feet? This

The explanation for this video doesn't make it any less alarming.

What’s the only thing scarier than tumbling out of a plane at 10,000 feet? Having someone attached to your back hitting you in the head as you fall, probably.

It may seem like the tandem skydiving instructor who’s latched onto his unfortunate student in this video’s last heartstopping jump is just trying to wake him up from a dangerous flying position—which doesn’t make it any scarier to watch a TI (tandem instructor) apparently wailing on a student in mid-air.

A big no-no for tandem flying is to use your drogue—that’s the mini-parachute that deploys about halfway through —to stabilize your fall. The idea is to relax your body position first, then deploy the drogue, and finally the main parachute. But the terrified student who jumps from the plane at the 1:18 mark isn’t making things easy for the instructor, who resorts to fisticuffs to get him to unclench from his foetal position. Not that we can blame him. As the helpless video diver watches, the instructor and his student go into a terrifying out-of-control spin.

While a shortened version of the video appeared on LiveLeak last night, it has apparently been making the rounds in the skydiving community since 2011, when the longer version popped up on YouTube and around skydiving forums. Members of popular Internet skydiving forum dropzone were horrified when the video surfaced there last month. “I’ve never seen a flatspin with drogue out before (and never hope to see one again),” commented forum member dragon2. Several other divers pointed out that if the instructor had been less fixated on punching his student he would have stabilized earlier and the fall would have been fine.

Members of the Tandem Instructors Network on Facebook agreed, noting that the instructor first allowed the student to exit in a dangerous position, then failed to stabilize the student before deploying the drogue, which sent them into the spin caught on the video. “So many wrong things in one video,” said tandem videographer Corné Voster. “Shocking!!”

Forum member Nealeod alleged that the TI in question reportedly lost his ratings (the equivalent of losing a teaching license) and faced criminal charges.

That’s the least he deserves for making us never want to go near an airplane again.