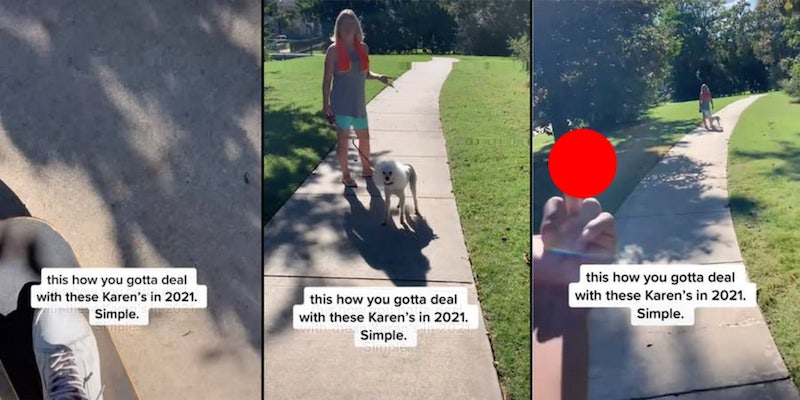 A Houston-based hip-hop producer and TikToker documented an encounter he had with a Karen who allegedly pushed him off his skateboard as he was trying to ride around an apartment complex. Commenters are applauding him for his retort to her behavior.

The video appears courtesy of @memphisbluu, who also uses that name (as his Linktree reveals) across a range of social media platforms. It has received more than 1.8 million views in less than 24 hours up on the platform. The creator is getting a lot of praise from people who appear to have had it with Karens and are looking for more people to confront Karens when they encounter them in the wild.

The video has an explainer comment to start, noting that “before I started recording, she tried to stand in front of me to block my path, and when I got past her, she pushed me off my board.” He also confirmed that the Karen’s chief complaints were twofold: He didn’t live in the apartment complex, and skateboarding wasn’t allowed on the sidewalk.

The comments also put the location of their exchange in The Woodlands, a Houston suburb.

The TikToker decided to record the confrontation in progress, starting with a back-and-forth about whether he had a lease agreement, presumably to determine if he had the right to be there.

When she indicated she didn’t know that he had a lease agreement, he decided he’d had enough.

“Exactly, you don’t fucking know,” he expressed. “So mind your fucking business, bitch! Go sit the fuck down!”

She stood her ground, in the middle of the contested sidewalk, and said, “You can’t ride your skateboard—”

It sounded like there was more coming, but he cut her off.

“Well, guess what the fuck I’m gonna do,” he offered.

“I’m gonna step on this bitch,” he continued, referring to his skateboard, “and I’m gonna ride this muthafucka!” He then wheeled away, but not before flipping her off and exiting by saying “Suck my dick” with aplomb.

The caption throughout the video expressed an attitude of intolerance toward Karens, noting, “This how you gotta deal with these Karens in 2021. Simple.”

Many commenters found the creator’s actions rose to the occasion, with one saying, “This is exactly how I would have handled this.”

“I love how TikTok never makes me feel alone,” said another. “This guy is my type of people.”

Though one person had issue with the language he used, indicated that crossed a line, the great majority of people stood with the TikToker and expressed their own judgments about the Karen.

One predicted, “You know she posted about you on the Nextdoor app.”

Updated 7:55 pm CT Aug. 31: The Daily Dot made contact with the TikToker Tuesday evening; he confirmed that the incident happened within a park inside the apartment complex as well as the other salient details in the story. He noted that he read a copy of the apartment lease today — the TikToker lives with his parents at the complex — and asserted that there are no prohibitions against skateboarding in the document.

He also added that he believed there was racist motivation behind the Karen’s actions, remarking, “With white women and Black men, white women are fully aware of how society works. They’re trying to act oblivious … but they’re fully aware of their privilege. Especially when it comes to situations with black men going on.”

He went on to characterize her as “very bold” in that she tried to physically prevent him from skateboarding.

“I was skating and see jumped out in front of me to try to block my path. And when I got past her, she pushed me over. She felt really bold to push a stranger, because she probably felt if I put my hands on her, it would have been a wrap for me, because I’m Black.” He went on to assert that if he came to a he said/she said situation with police, “They’re gonna believe whatever she says regardless.”