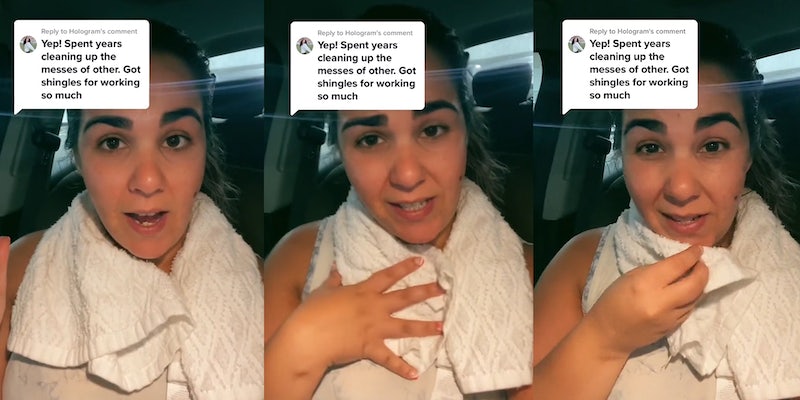 ‘Spent years cleaning up the messes of others’: Woman says she ‘got shingles’ from overworking, sparking discussion about the toxicity of Corporate America

'My doctor told me my cancer was stress-induced.'

A TikToker responds to a comment where the user wrote that they “got shingles” from spending years “cleaning up the messes of others” in a corporate work environment in a video. The TikTok sparked a discussion on how overworking can take a toll on workers’ mental and physical well-being.

On Aug. 30, TikToker Samantha (@samsramblings) stitched a video of a user asking, “What’s something you were not prepared for about the corporate world?” In the clip, she says that “instead of being celebrated, high achievers are punished in the corporate world.”

In response, user @hologram82 wrote, “Yep! Spent years cleaning up the messes of others. Got shingles for working so much.”

While shingles is caused by a common viral infection, the disease can be triggered by “daily,” “chronic” stress even if it was previously dormant, according to Healthline.

Samantha responded to the comment in a TikTok empathizing with the commenter, and clarified that she herself is now in a work environment where she feels “celebrated,” explaining that this has been her experience working in corporate “overall.”

“More times than not, I was told that other people can’t meet my standards so I shouldn’t hold them to my standards,” Samantha says in the clip. “However, the moment I wanted a break they were up my ass complaining that, ‘Oh, she’s not working as hard.'”

The response video has amassed over 10,500 views as of Sept. 27, with users sharing their own stories of overworking until they experienced a health crisis. According to a 2016 study, “excessive work-related stress” is responsible for approximately 120,000 deaths per year in the United States, pointing to a larger trend in stress-induced illness amongst American workers.

“I got cancer from my work environment. My doctor told me my cancer was stress-induced,” one user said.

“I completely lost my health too. Not worth it man,” another wrote.

“I learned recently that if I get sick I’m expected to still work (which the stress made my illness last longer),” a third added.

Others agreed with Samantha’s original video, writing that they weren’t treated well as high-achieving employees.

“I never got promoted because no one else could do my job as well as I could. New hires got promoted in under 6 months,” a commenter wrote.

“AKA known as a ‘workhorse’. I appreciate that acknowledgment but you are too important doing the work to promote!” another said.

The Daily Dot reached out to Samantha and @hologram82 via TikTok comment.