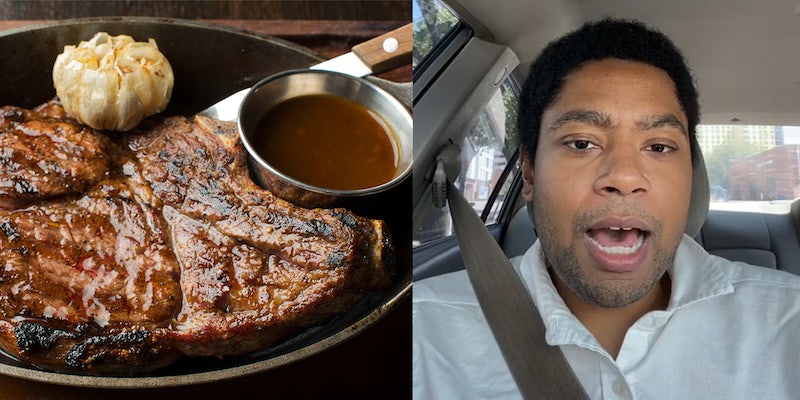 ‘So the table ate for free’: Server fired for failing to close a check, sparking debate

'You're not wrong, because I also cheated myself out of a $150 check.'

In a viral video, a server on TikTok claims that he was fired from his restaurant job because he didn’t close out an expensive check at the end of his shift.

“So I just got fired,” the creator (@quezeats) starts the video. “Last night, there was a $699 check that I just didn’t close. I don’t really know what happened…so the table ate for free.”

He reveals that the table had ordered a ribeye, a $400 steak, and some drinks. Since they ate for free, “they had a good night,” @quezeats jokes.

That next day, he says the manager pulled him aside to talk about the unpaid check and told him that the job wasn’t going to work out. The TikToker says the manager told him it wasn’t a small mistake—it was a $700 mistake.

“You’re not wrong, because I also cheated myself out of a $150 check,” he says. “I was really overwhelmed before then, and I’m like, it is what it is. It’s in God’s hands.”

The manager then confronted him about his nonchalant attitude, @quezeats says, as he claimed others have noticed.

“I don’t give a damn,” he concludes. “I mean, I do…I’m going to have to find a new little side thing, but like I kinda didn’t want to work there to begin with. I was like wow, I’ve never been fired from a job…as he should.”

In a comment, the TikToker clarified his mistake for those confused. “I didn’t apply his payment to the bill, so he ate for free,” he wrote. “The check was still open when I was leaving for the night.”

He adds in a more recent video that he thought he had run the customer’s card, since he gave them the receipt to leave a tip, but that may have been from another table. “It was a genuine mistake,” he says.

His initial video has received nearly 30,000 views since it was shared Sunday.

In the comments section, viewers weighed in on the situation. While some agreed that the mistake led to a rather high loss, others argued that the manager should have been more proactive to catch the issue.

“LMFAOOOOOOOOOOOOOOOOO I was ready to defend you until you said $699,” one user commented.

“I would have been nonchalant too. I can’t change the past now,” another said.

“I wouldn’t take it too hard, it was a mistake but also where was the manager on duty? They should have caught that before EOD,” a third user argued.

In a follow-up video, @quezeats explains that he wasn’t feeling well during his shift and had spoken to the managers about how overwhelmed he felt. “I was already out of it before I even stepped foot on the floor,” he says.

However, the TikToker adds that he doesn’t blame the restaurant for letting him go.

“It’s a really nice restaurant, so if it’s a one-and-done type of deal, I get that,” he concludes. “I don’t blame them. On to bigger and better things.”

The Daily Dot reached out to @quezeats via TikTok comment, as other methods of contact were not available.