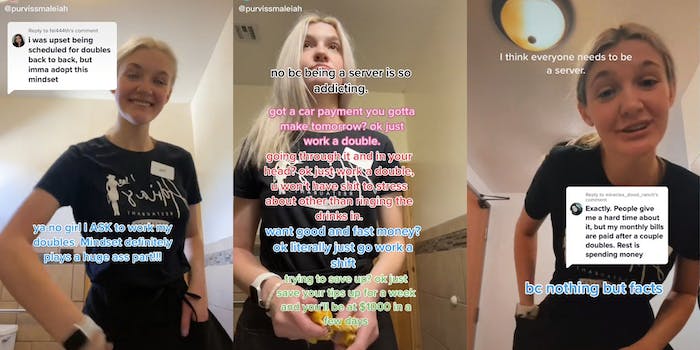 ‘Got a car payment you gotta make tomorrow? Just work a double’: Server explains why her job is so ‘addicting’

A TikToker’s video explaining why they find working as a server so “addicting” has drawn more than 2.2 million viewers on the platform, where commenters chimed in with their own reasons for adoring (or disliking) their service jobs.

Posted by user Mia (@purvissmaleiah), the video lists the reasons she finds working as a server beneficial in a text overlay.

“Got a car payment you gotta make tomorrow? Just work a double,” the overlay reads. “Going through it and just in your head? Ok just work a double, you won’t have shit to stress about other than ringing the drinks in. Want good and fast money? Ok literally just go work a shift. Trying to save up? Ok just save your tips up for a week and you’ll be at $1,000 in a few days.”

Some viewers shared their own experiences working as a server in a restaurant.

“Exactly,” one commenter wrote. “People give me a hard time about it, but my monthly bills are paid after a couple doubles. Rest is spending money.”

“I did this until I was 29,” another commenter wrote. “It’s a whole culture. I miss it. The way it smells outside at 3 a.m. after you’re finished working a double. Nothing better.”

“Especially when you work in a restaurant you like!” a commenter wrote. “I was there almost every day. They’d have to send me home early bc hours.”

Others shared less positive experiences working in the industry.

“Serving [was] the hardest job I ever had I give props to people who manage to do it!” one commenter wrote. “I only lasted two months.”

“I couldn’t,” another commenter wrote. “I worked as a hostess and dishwasher/delivery and watching the servers survive made my head explode. But I did my best to help them.”

“I could never be a server, I was a host and watching y’all was too much for me,” a commenter wrote. “But I always helped y’all get the big tables for tips.”

The Daily Dot has reached out to Mia via a comment left on the video as other methods of communication could not be identified.