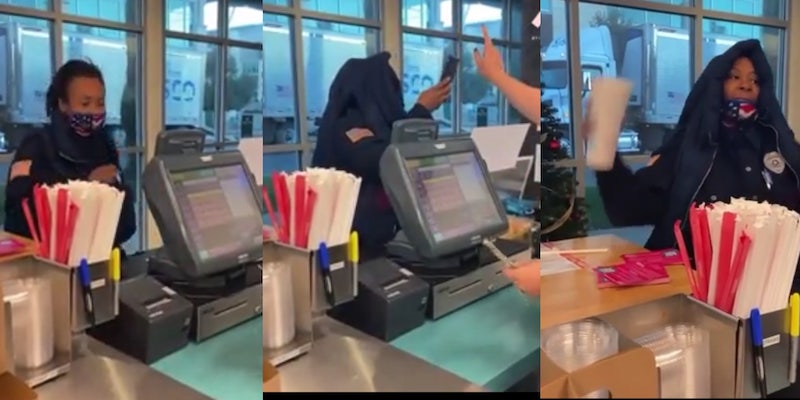 ‘I don’t give a f*ck what you say!’: Security guard makes offensive comment, throws smoothie at cashier

A video going viral on Reddit shows an apparent security guard throwing a smoothie at a cashier after making offensive and racially insensitive comments.

Uploaded to the r/PublicFreakouts subreddit page by user u/Sleepy_Passion on Tuesday, the video starts off relatively calm, as the security guard, who was a customer at the food stand, appeared to have an issue with the price of her drink.

“$9.03 that’s what you’re getting back,” she said, as she tossed a handful of change on the counter.

The video then quickly cuts to the security guard covering her face while pulling out her camera to record the employee, prompting the employee to yell out, “No, no, no, you don’t have to record me,” back at her.

As the security guard and employee begin to exchange remarks back and forth, the conflict escalates when the guard shouts “not peso,” presumably referring to the change the employee was counting out, which the employee found offensive.

“That’s so racist, I’m not over here disrespecting you,” the employee responds as the customer continues to shout and record the employee.

“Give me my money, I don’t give a fuck what you say!” the customer shouts at the employee before throwing the smoothie at them and running out of the store.

Redditors who reacted to the video found the customer’s behavior off-putting, with one remarking that the customer “runs away like a child who broke a lamp” after hitting the employee with the drink.

“Garbage tier human being,” another commented.

Others hoped that the employee pressed charges against the customer.

“Also hope she lost her job, because she is in no way suitable to be a security guard,” one commented.

Other redditors commented about how the customer’s behavior appears to be a common occurrence in retail, which promoted others to share their experiences of when customers took their anger and frustration about the company out on them as employees.

“It sucks, because those kids don’t make the prices they just work there,” one commented.

The security guard has apparently been fired from her job and the employee has pressed charges, according to the original poster, though the user stated that the employee in the video, who reportedly uploaded the video to Instagram, requested not to be named. The user has not immediately responded to the Daily Dot’s request for comment. Re-uploads of the incident on social media say that it took place in El Paso, Texas.